Today is Duncan’s birthday — his 3rd!  He is a wonderful dog.  Sweet, relatively obedient, and incredibly lovable.

But I went a bit overboard with doggie treats for this good boy this year.  So I figured I’d share them with his friends at the park.  In a way that would be good for the earth.  In a way that positively shouts “DOG!” I made doggie goodie bags! 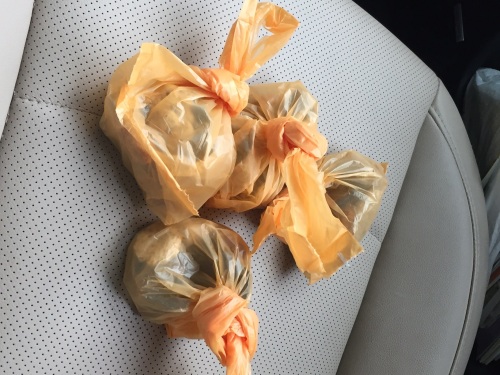 OK, in the stupidest way possible.  I used biodegradable dog poop bags, and filled them full of delicious brown dog treats.  That way, if I missed any of the morning friends Duncan and I usually walk with, I could leave one on their car.

A dog poop bag filled with brown stuff, left on a car.  What could possibly go wrong?

Luckily for me, we saw his friends, and they and their parents were delighted by the goodie bags.  They didn’t think me weird for

Rights?!? WTF is Wrong With Us?

Look into the eyes of a terrorist.  A threat to your safety and mine.  Something should be done about her.  Ammirite?

Oh wait!  Something was done about her!  I feel safer already.

Virginia, where I live, is an “Open Carry” state.  Where folks can pack their pistols and take them with them no matter where they go.

Maybe your state is among them!  Wouldn’t that be great? 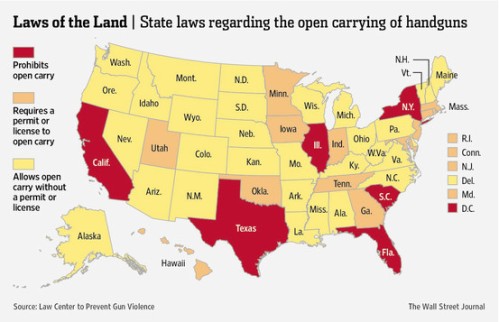 Photo from the Law Center to Prevent Gun Violence, courtesy of the Wall Street Journal.  And Google, natch.

Now what connection could that picture and that map possibly have?

Macie, an 11 month old lab mix was running in a park on a beautiful day.  Her crimes were many.  Serious.

So naturally she deserved to be shot.  Oh, and killed.

I guess I should back up a bit.

Macie was running off-leash in a park where she wasn’t supposed to be off-leash but where everybody lets their dog run off leash.

Smith said her dog approached the couple and jumped in the air. She said the dog was leaping behind the man but was not barking at the time.

At that point, the man yelled out, “Call your dog,” Smith said. “He said it once, maybe twice.”

Smith said she and her friend then started running toward the dogs, who were about 20 yards away.

“We called for our dogs,” Smith said. Then she said she saw the man’s arm “go to his side” and across his body. “He sees us coming,” she said. The man pulled out a gun and fired it at the dog.

The man faces no charges.  He was legally carrying a gun and reportedly “fired in self-defense.”  But really, there was no threat.  The owner was coming for the dog.  She was a fucking puppy saying hello.

This story has me pretty upset.  Because I walk Duncan not too far from the scene of Marcie’s killing.  Duncan is often off-leash, too.  Because it is a beautiful place to let him run.  There aren’t many places where off-leash is permitted around here.  Those places that exist are small fenced in dog parks that reek of pee.

Duncan is quite good at coming when I call him — he always gets a treat.  But he’s friendly, and I have to (and do) restrain him when I see an unfamiliar walker or jogger coming towards him.  He loves to say hello.

Duncan and I walk here most days.  Not far from where Macie died.

To me, this man is a perfect example of exactly the problem with folks carrying around guns.  They use them.  Stupidly.  And without consequence.

Common sense and restraint don’t enter into the picture.

We need to do something about our society where folks feel the need to carry a gun, and feel entitled to use it.

Filed under 'Merica, A Little Restraint, Perhaps, All The News You Need, Ammosexuals, Beating that Dead Horse, Being an asshole, Cancer on Society, Cowardly Gun Owners, Crime and Punishment, Criminal Activity, Disgustology, Don't Make Me Puke, Duncan, Elections Matter, Gun control, How the Hell Did We GET HERE?, Huh?, Humor, Justice, Oh shit, Taking Care of Each Other, What a Putz, WTF?

Tagged as Common Sense, Dogs, Guns in Pastoral Parks, Jesus Christ How Did We Get Here, She was a PUPPY, Writing, WTF ARE YOU SO SCARED OF?, WTF?

Even though every day at my house is Dog Day, I figured I hadn’t posted a picture of Duncan in a while.   Here he is, the Devil! 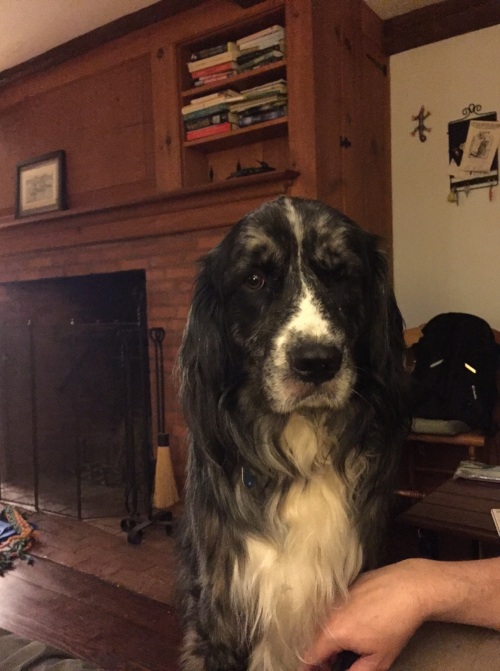 Damn!  You caught me looking at the camera!!!

You See, I DO Appreciate Art and Shit! 💩

With an artist brother and a sister-in-law, you’d think I’d be more involved in the art world. Sadly, I’m not.

I used to be more of a gallery girl, loved nothing more than spending time in any one of the wonderful museums and galleries near where I lived or worked.  And the galleries I got to visit while living in or traveling to Europe could fill a book.  Still, going to a museum with either Fred or my sister-in-law, with someone who knows a lot about art, well, it is a wonderful treat.

But with my Crohn’s disease as active as it is these days, I don’t go very often.

For anybody without access to art, though, I recommend following my blogging buddy Mark, of Exile on Pain Street .  He works in NYC and frequents museums, galleries and auctions and frequently writes about it on his blog.  Mark does it with wit and without the snobbishness that usually accompanies folks who talk about art.

But nobody posts about art quite like I do.  Or about art theft, because that’s really what this post is all about.  Art theft pure and simple. 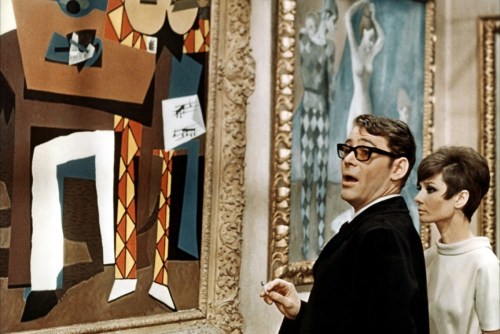 The international art heist I’m talking about occurred in Spain, just outside Madrid.  I’m pretty sure it involved neither Audrey nor Peter.  Nor, probably, would the stolen object ever find its way into the Louvre.

Still, if you know anything about art, the beauty of an object is all in the eye of the beholder.  It may also be dependent on the species.  Or on the leash holder.

Yes, it is a giant, inflatable pile of dog poo.  Photo from BBC (although they might deny it)

The article I read says:

The three-metre high inflatable bought as part of a campaign to encourage pet-lovers to pick up after their dogs went missing, El Pais newspaper reports. The bizarre inflatable disappeared after it had been packed away in its carry-case and the police are now on the trail of the 30 kilogramme dog poop, town officials say.

Speaking to the ABC newspaper, town councillor Angel Guirao said staff were shocked and perplexed by the theft, and a replacement excrement was already on order because “we know that the campaign has been a great success”.

I wish they’d asked me.  I could have provided plenty of models for this piece of art. 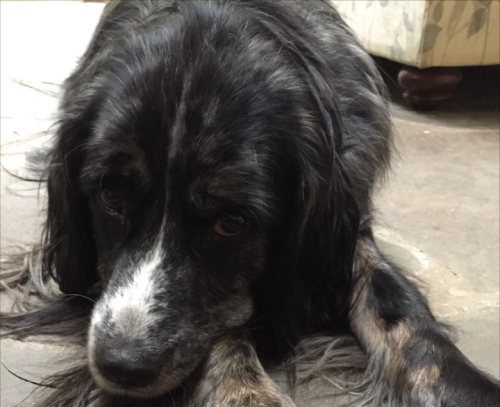 Why are you picking on me.  Google, eat your heart out cause I took this one!

Don’t hesitate to ask me anything about art.  Or poop.

“A haircut will make you feel better, Lease,” my niece, Jen, said as we wandered the mall.  We were together in Florida to organize and attend my dad’s funeral.  It was December, 2000.

For reasons I still don’t fully understand, my brother Bob, who was Dad’s primary caretaker at the end, was insistent.

“Dad wanted to have Bobby Darin’s Mac The Knife played at his funeral,” Bob insisted.  So in the days before YouTube, Jen and I were on a mission, looking for a CD of the song.  It was no easy feat, let me tell you, finding that recording.*  Record stores were fading, and the stock held by the few remaining didn’t include too many hits from 1958.  Jen and I were getting tired and frustrated.

But Jen was right, I looked awful.

My hair is my best feature and always has been.  It’s strawberry blonde, thick and curly.  It does what it wants to do, which is good, because I don’t like to fuss with it.  And I always let whoever cuts my hair do what they want with it.  It always looks better than when I tell the expert what to do.

Into the salon Jen and I went.

Mellie, the hairdresser I ended up with, was young — 19, she said.  Her hair was black and pink, and she wore thick makeup and brass hoop earrings the size of hula hoops.

I looked at Jen skeptically.

“It’ll be fine,” she reassured me.  Of course, she wasn’t getting her hair cut.

I told Mellie to trim my hair, that I was going to a funeral and needed to be presentable.

“How about …” Mellie started talking about different looks.  But really, I didn’t care.

When she finished, she twirled my chair around like a playground carousel.

She’d given me the ugliest hairstyle I’ve ever seen — Jennifer Aniston haircut from friends.  Cut short in the back, with long sides.  It’s not a nice look on a human.

John and Jacob hadn’t been able to get to my Dad’s funeral — there were no flights available.  John was gentle when he saw my new do, though.  After all, I was grieving.  A month later when I had all my hair cut off to get rid of the stupid style, John said “I was really surprised to see you with that style.  You looked like Cooper [our English springer spaniel.]    Long curly bits around your ears and nothing in back.”

Yesterday I had my long hair cut to chin length.  When he was done, my longtime hairdresser Ric, who has never given me a bad cut, spun my chair around and proclaimed:

* We were, happily able to find a recording of Mack The Knife: