Last year a friend stopped by our house in the middle of December.  “God, it’s December 15th,” I said to her, “and the only decoration I have up is the wreath on the door!”

“I don’t think that counts, Lease,” responded my husband John. “You didn’t take that down from last year.”

It wasn’t always true, though.  I used to be one of them.  I was a veritable Christmas Elf.  I baked, I decorated.  I embroidered Christmas stockings for the whole family.  My son Jacob and I built gingerbread houses that did not come from a mix or a box and were actually made of gingerbread stuck together in the shape of a house!  My friends got a bottle of homemade Irish Cream liqueur.  Some used it to get their kids to bed on Christmas Eve.

But mostly, I sang.  The records, tapes and CDs came out on Thanksgiving.  From the moment I woke up the day after Thanksgiving, until New Years, I would trill away.  “White Christmas,” “Do You Hear What I Hear?” “Have Yourself A Merry Little Christmas.”  I belted “Mele Kalikimaka” when I had an established escape route to avoid people trying to punch me.  I know the words to all 18,423 verses of Frosty the Snowman.  I would start singing in the shower and keep going until John tackled me and put duct tape across my mouth, usually at about 8:30 a.m.  Regardless, I’d start up again the next morning.

So you see, I do understand the Christmas-sy part of Christmas.  The love, the joy, the traditions.

But now I see the other side.  And it’s that “tradition” part that is to blame.

You see, my family’s always been fairly competitive.  My mother and her sister Ruth were particularly so.  They’d argue at each shared Sunday dinner over a million things:  whose gravy was better (my mother’s), who cracked the best one-liner (always Aunt Ruth – she was a hoot), and most traumatically for me, whose young daughter was taller. (Duh, Maureen was almost a year older than me – of course she won every time.  But you’re not taller now, are you?  And you’re still older, Maur.  You’re still older.  How do you like it??)  Darn, I wish I’d missed the competitive gene.

When I was a kid, Aunt Ruth was high on the list of my favorite relatives.  Now she’s tops on an altogether different list.  And it ain’t Santa’s list, neither.

Because Aunt Ruth started a family tradition.  A competition.  But it’s not a family tradition I recommend, especially during the Christmas season.  In fact, it should have a warning, although I’m not sure where you’d put it:  Don’t try this at home.

You see, Aunt Ruth started the tradition of kicking the bucket on a major holiday.  What fun!  Great idea!  Not many families do that!  Hey, we are DIFFERENT!

Knowing Aunt Ruth, I’m sure her last thought was “Doris, you’ll never top this one!  I’m dying on Thanksgiving!!!!”   She was no doubt a bit miffed when my mother joined her a couple of years later.  Because, not to be outdone, Mom arrived in the afterlife on Easter Sunday.

Their party really got going when we reached Y2K, and my sister Judy died unexpectedly on my birthday in January.  Now, you might argue that my birthday is not, technically speaking, a holiday.  Not a paid day off for most folks.  But hey, in my book, this qualifies.  So there.

As time went on, there were fewer and fewer holidays I could celebrate.  The only big one left was Christmas.

Guess what happened on Christmas, 2000!  Yup, Dad reclaimed his spot at the head of the table with Mom, Judy and Aunt Ruth. Dad trumped them all.  Or because it was Christmas, perhaps he trumpeted them all.  Maybe both.

I must say I am rather ticked off about it all.  Sort of changes the tone of the Holidays, you see.  I plan to have words with all four of them, next time I see them.  And I will not be nice.

In the meantime, celebrating holidays, well, it just seems so odd to me.  Especially Christmas, because Christmas is so stuff-oriented, and most of my Christmas stuff is from them.  It takes a bit of the fun out of decorating.

For a while, I considered joining the Eastern Orthodox Church.  That way I could celebrate the same holidays, just on different days.  I could keep all my Christmas crap!  I could decorate!  I could bake!  I could sing!  But then I realized that the change would just give us all additional high priority target dates, and I don’t have enough family members left to meet the challenge.  So Eastern Orthodox is out.

At the same time, I also realized that, when Dad hit the Holiday Lottery, the whole tradition had to stop.  Because I’m pretty sure that biting the dust on, say, Columbus Day, just wouldn’t cut it.  So why bother?

Nevertheless, this whole thing has made me decidedly anti-Holiday.

There is one holiday I still look forward to, though.  Groundhog Day.  I just can’t figure out what sort of decorations to put up. 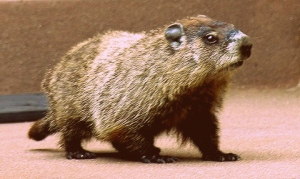