I’ve been working on this post for weeks.  I never do that.  I even went back and forth over whether I should tell it, and if so, whether the anniversary of D-Day was the right time to do so.

But this story kind of haunts me.  I change my mind about it all the time.  I try to work it out in my mind, but I can never be certain of what really happened.  So now I’ll let you think about it, too.

In late June 1998, John, Jacob and I took my Dad, then aged 81, to Normandy, France to visit the D-Day landing beaches, museums, the works.  Dad was a WWII vet – he was in the U.S. Navy during the War, stationed on two different aircraft carriers in the Pacific.  He fought in some of the big battles in the Pacific, as a gunner on an SBD Dauntless, a seriously cool little plane.

But Dad was always fascinated by the D-Day landings.  The planning, the strategy.  The very real possibility that it could have failed.  And he had lost friends there.  Two of Dad’s closest childhood friends died there, they’d gone ashore at Omaha Beach.  Dad had always wanted to visit Normandy.  So when he came to visit us in Switzerland, we took a road trip. 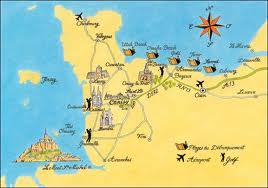 The folks in Normandy, well, they love Americans.  We stayed in Sainte-Mère-Église at a lovely farmhouse on the outskirts of town.  The owner of the farm treated Dad like royalty, even though he told her he was fighting in the Pacific.  The trip was, my Dad said forever afterwards, one of the highlights of his life.

Now, you know what happened on D-Day.  The invasion began when the Allies sent paratroopers into some of the strategic areas slightly inland from the Normandy Beaches they would invade later on that day, on the morning of June 6th.  There were many problems with the drops of these paratroopers.  Some of the most dramatic stories came from survivors  who dropped into Ste. Mère-Église.

You see, that night, June 5/6, there was a fire in the town hall.  All the townspeople were out, along with the German occupiers, trying to put out the fire.  It spread to several nearby buildings.

Into the midst of this chaos, the American paratroopers fell.  Many of them were shot by German troops as they dropped, butchered.  Others were caught on trees, on buildings –including John Steele.  Steele had parachuted into the middle of town, and his parachute was caught on the church steeple.  Steele played dead for many hours, with the church bell ringing in his ear, watching many of his fellow paratroopers die.  Steele was memorably portrayed by Red Buttons in the movie The Longest Day.

There are still parachutes on many of the buildings commemorating the landings.

Things changed, the Allies won, the day/night.  Ste. Mère-Église was the first town liberated by the Allies on June 6, 1944.  D-Day.  It was a vital victory for the Allies, for the French, and really, for the world.

John Steele survived and returned to Ste. Mère-Église after the war.  He opened up a restaurant that became a huge draw for tourists, including us.  Our first night in town, we had reservations.  But we were early, and the restaurant wasn’t yet open.  So we went to a cafe/bar around the corner to get a drink while we waited for half an hour.

John, Dad, Jacob and I sat at a table, excitedly talking about our tour of the town.  Ste. Mère-Église is seriously cool.  There are still parachutes hanging in trees, on buildings.  It is still a real town, but it is also a memorial to the men who fought and died there, and a place that welcomes veterans with affection and gratitude.  Unlike much of France, the folks in Normandy truly remember.  And they love Americans.

So sitting there at the table having a drink, we enthusiastically recounted what we’d seen so far.  With two history buffs in the group, Jacob and I learned a lot from John and Dad.  Placards explain the events of the night so that it is easily followed.  We were all so excited, chatting about the history, explaining more to Jacob.  We had seen so much already, and it was only our first night!  The next day, we would visit the beaches.  We were excited.

A man standing at the bar behind us was pretty excited too.  Quite animated, in fact.  But perhaps that was just because he had had three or four drinks too many.

“Damn, if I had it to do over again,” blared the drunk American at the bar.  He followed it up with a string of obscenities that made my Dad, the sailor, blush.  Then the drunk caught sight of me and 7-year-old Jacob.  He wandered over to us and offered us his apologies.  We politely accepted them.  But he didn’t seem to take “no problem” as an answer.  He introduced himself as Howard Something-or-other, and stood talking with us about how he had retired to Normandy.

Stupidly, I asked “What brought you to Normandy?”

“Well,” he said with a twinkle in his eye, “I happened to drop into town one night…”

“Oh, uhh, wow,” I said, looking skeptically between John and Dad.  They didn’t seem to believe the guy either.

But Howard proceeded to tell his story:

“Yup,” he said, “I dropped in here one night.  I landed in the cemetery over back by the Town Hall, which, as you know, was on fire.”

He continued:  “First, I crapped my pants,” he announced, looking straight at my 7-year-old son who was mortified.  I was pretty sure we didn’t need to hear that.

“Actually,” he said, “I really lucked out.  The cemetery had a tall stone wall around it.  And the Germans were occupied with the fire and then with the guys who were dropping into the middle of the town square.  Me, I hid behind some gravestones until I realized that, hell, a cemetery is no place to die.  So I made my way out, and linked up with my buddies.”

We didn’t believe a word of it.  For one thing, the guy looked way too young.  Remember, it was 1998, fifty-four years after the Normandy Invasion.  Looking at him, I could see Howard couldn’t then have been more than 60 or 65.  That put him in grammar school during the War.  Besides, there was just something about him.  None of us believed him.

Howard was meeting someone, and we had a dinner reservation.  So we didn’t pursue his story.

But the next day when we went to buy postcards to send back home, well, we saw something rather surprising:  A postcard of Howard Manoian.  Our Howard from the night before.  The drunk.  The faker.  The guy whose heroic WWII story we didn’t believe, and to which we only listened to a bit of, and then only out of politeness.

We felt really stupid at not having tackled the guy and listened to the rest of his story.  Peppered him with questions.  What a horrible lost opportunity.  Imagine, to hear a first-hand account of what happened that night.  June 6, 1944. 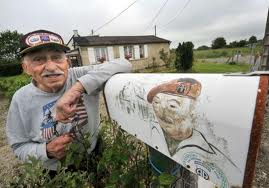 Howard in the Countryside (Google Image)

Fast forward to May/June 2009.  The Sixty-fifth Anniversary of the Normandy Landings.

A few days before the 65th Anniversary of the D-Day landings, John sent me an interesting email.  It was a link to a Boston Herald article that exposed “an American fraud.”  Yup, you guessed it.  Our Howard was revealed in the article to have not “dropped into” Ste. Mère-Église, after all.  The article claimed that military records stated that Howard was part of the invasion force that landed at Utah Beach.  (Which was seriously cool in and of itself.)

Even though I hadn’t believed him when he was standing next to me, I was really sad to read the story.  Imagine living a lie for all that time.  For sixty years.  Howard had lived, part-time, in Ste. Mère-Église for decades.  He had attended many D-Day ceremonies over those sixty-five years.  He had been telling his story, albeit often under the influence, for many, many years.

And so I was sad.  Yes, the guy had been “a bit of a weirdo” to quote Dad.  And yes, he had been rather inebriated.  But was he a fraud?  Could “Weird Howard” have been living a lie for all those years?  If so, how sad, how pitiful.  But how could that happen, I wondered, to tell this lie in a place where veterans of D-Day flock?  In a place where, I thought, sooner or later, someone would recognize him?

In traveling about, and especially visiting many battlefields with John, the history buff, I am often astonished at the images of what soldiers and sailors face in battle.  But I have never been anywhere like Normandy.

When you stand on the beaches and look up at where the troops had to go, the price of what we often take for granted looms out of the ghosts.  The cliffs are high, ragged.  With no climbing skills at all, I can’t imagine trying to get to the top, much less with guns pointed and firing in my direction. And yet they did.  And many of them died.  Many of them were wounded.  Many of them are still there, buried at the top of the cliffs, overlooking Omaha Beach.  I felt an almost religious appreciation for the Greatest Generation‘s sacrifices.  There is no physical place that to me represents the ancient struggle of good versus evil.  It is awe-inspiring.

And really, it all started in and around Ste. Mère-Église.

In researching this post, I found conflicting information about Howard.  Some folks say Howard was a fraud.  Others, including the French Government believe his story.  And at the 65th Anniversary of D-Day, in 2009, the French Government awarded Howard their highest medal, the Legion of Honor for exemplary valor and service, even after the Boston Herald article “exposed him” as a fraud.

Me, I don’t know what to think.

Or maybe I do.  I find it hard to believe that anyone could live such a lie for over 60 years and not be exposed much, much earlier.  He told his story over and over, like Mr. Bojangles, for drinks and tips.  Now you would think that if, in fact, he had gone ashore at Utah Beach, he would still qualify for hero status.  Because, you know, the folks that fought there, regardless of in what capacity, division or from which country, well, they are all heroes.  They all deserve our thanks.

More practically, the likelihood that he would have run into someone who recognized him from that day was pretty high.  Folks remember.  And folks return.  I’m pretty sure at least some would have clear memories of who stood next to them on the landing craft or on a glider soaring silently above Ste. Mère-Église.

So in the intervening years, I have thought about Howard quite a bit.  I wish we had heard more of his story.  I wish, at a minimum, that we had bought him a beer, although he didn’t really need another one.  I wish that Howard, who died just last year, didn’t pass with a cloud over his head.

Stars and Stripes:  A jump from the truth

68 responses to “A D-Day Quandary”