Yes, I’m sick of the reminders, too.

Sick of the candidates’ signs.

Sick of the damn phone ringing with robo-calls and folks who can’t pronounce my name calling during dinner.

Still, it is important.

Vote!  Keep the crazies in office down to a minimum.

Filed under All The News You Need, All We Are Saying Is Give Peace A Chance, Bat-shit crazy, Beating that Dead Horse, Campaigning, Climate Change, Crazy Folks Running, Criminal Activity, Do GOP Voters Actually THINK?, Elections, Just Do It and I'll Shut Up!

Sometimes, I am left speechless.

Sometimes, I feel my gag reflex going into hyper-drive.

And sometimes, I just need to get out of the way and let some folks speak for themselves.

So I’m gonna do just that tonight.

And since I know you, and I KNOW you didn’t click on that video, I will have to step back up to the plate and tell you that the good doctor explained that we Democrats are all wrong.

Dr. Carson let all of us know that the GOP, well, they aren’t so bad.  Women should like them, even.

So says the No. 2 (in some polls) Republican presidential candidate Ben Carson.  It’s true.  He said on Thursday that Democrats were wrong to allege Republicans were waging a “war on women.”

This guy should be headlining in the Poconos.  What an eff’in commedian.

Oh, well, maybe I do have something else to add:

Filed under Adult Traumas, All The News You Need, All We Are Saying Is Give Peace A Chance, Awards, Bat-shit crazy, Campaigning, Cancer on Society, Conspicuous consumption, Crazy Folks Running, Criminal Activity, DON'T go back to your day job either, He is THIRD IN THE RACE FOR THE NOMINATION, What a Maroon, Where does the GOP get these guys?

Tagged as Assholes, Awards, Bat-shit crazy, Bigotry, Birth Control, Campaigning, Dr. Carson you will never operate on me, Holy Shit, Huh?, Keep your hands and your ideas out of my vagina, Seriously Stupid!, Seriously?, This guy s hould be playing the Poconos, THIS MAN HAS A LICENSE TO OPERATE ON YOUR BRAIN!, Who writes your material?, Women's issues

I have a pretty good track record in choosing Presidents.  Sometimes, I’m way ahead of the game.  I decided in 2004 that I wanted Obama for President.

Sadly, I didn’t notice him on the ballot for a while.

This time around, I haven’t been able to decide. Hillary?  Bernie?  There are things to recommend each of them.  So what is a good citizen to do?

Please join me in supporting the candidacy of Donald Trump:

Because Donald Trump stated the following:

WINTERSET, Ia. – Donald Trump says if he gets elected president, he would have to change his hair style because he wouldn’t have time to maintain it, as he would be working his butt off in the White House.…[Emphasis added]

The world will be a far, far better place.

I found this, along with a zillion other brilliant pictures at The Last of the Millenniums.  He’s got a gift for finding the really fun stuff.

Like many of us, I’ve been wondering what I should say since I woke up Thursday morning to the news of the latest gun massacre, this time, in Charleston, South Carolina.

I often feel like I’m beating a dead horse here at FiftyFourAndAHalf.  Do you really need me to go off on another rant about sensible gun laws?  I didn’t think so.

There is plenty of outrage on so many levels  with this latest shooter.  The deed itself.  The fact that he sat in church with his victims for an hour and then killed them.  The after-the-fact suspicions of his friends that he had been planning this for a while and nobody spoke up.

There is plenty of outrage with the idiotic reactions on the part of just about every member of the GOP, particularly their presidential candidates. They stammer.  They point the blame on other things — Rick Santorum says it’s a “War on Christians” (huh?); Rick Perry says it was the fault of Big Pharma (huh?).  Jeb! says he just doesn’t know if racism played a part — in spite of the words of the shooter that he wanted to start a race war.

But I save my greatest outrage for Senator Lindsay Graham.  He hemmed and hawed at first.  And then he said it.

“The Confederate Flag,” Senator Graham said,  “is who we are.” 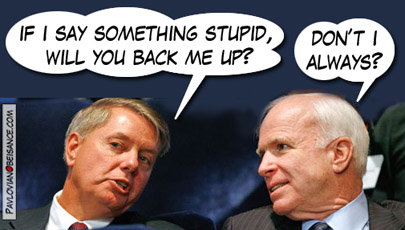 Senator Graham speaks for folks who didn’t get the news:

These folks have clung to their racist beliefs.  Their strong belief held fast in the 150 years since the Confederacy lost, in the mistaken idea that African-Americans, blacks, Negros, colored folks (depending on the era we’re talking about) weren’t “created equal.”

With all I’ve read in the last two days, one article, The Confederacy is Not Our Heritage, really struck home with me.

First, Mr. Sumner put to rest the lie that the states seceded over “States’ Rights”:

The Confederacy was launched not on a platform of slavery, but on a foundation of racism. That it maintained slavery as an institution was a feature. That it upheld racism was the design. Read the words of Confederate Vice President Alexander Stephens, speaking at the Athenaeum in Savannah, Georgia:

The new Constitution has put at rest forever all the agitating questions relating to our peculiar institutions—African slavery as it exists among us—the proper status of the negro in our form of civilization. This was the immediate cause of the late rupture and present revolution. Jefferson, in his forecast, had anticipated this, as the “rock upon which the old Union would split.” He was right. What was conjecture with him, is now a realized fact. But whether he fully comprehended the great truth upon which that rock stood and stands, may be doubted. The prevailing ideas entertained by him and most of the leading statesmen at the time of the formation of the old Constitution were, that the enslavement of the African was in violation of the laws of nature; that it was wrong in principle, socially, morally and politically. It was an evil they knew not well how to deal with; but the general opinion of the men of that day was, that, somehow or other, in the order of Providence, the institution would be evanescent and pass away. … Those ideas, however, were fundamentally wrong.  They rested upon the assumption of the equality of races.  This was an error. It was a sandy foundation, and the idea of a Government built upon it—when the “storm came and the wind blew, it fell.”Our new Government is founded upon exactly the opposite ideas; its foundations are laid, its cornerstone rests, upon the great truth that the negro is not equal to the white man; that slavery, subordination to the superior race, is his natural and moral condition.

. . . look with confidence to the ultimate universal acknowledgement of the truths upon which our system rests? It is the first government ever instituted upon the principles in strict conformity to nature, and the ordination of Providence, in furnishing the materials of human society. Many governments have been founded upon the principle of the subordination and serfdom of certain classes of the same race; such were and are in violation of the laws of nature. Our system commits no such violation of nature’s laws.

So much for States’ Rights.  That, like the Glory of the South (and proclamation that “The South Shall Rise Again!”) is a myth, belied by these words.

The author grew up in Kentucky surrounded by the vestiges of the Civil War.  Here in my adopted state of Virginia, they surround me as well.  But they are not the vestiges of a defeat and the lessons that should have been learned from it.  No, they proclaim the heroism of the Generals, the glory of the battles, the fierceness of the Rebel yell.  Here in Virginia, there is a state holiday in January — Lee-Jackson Day.  A couple hours south of here is the Stonewall Jackson Shrine.  All proclaim the glory of the Civil War, as if it, and the reasons behind it, were — and still are — worth fighting for.

If you don’t know the history of who won and who lost, well, you’re not going to find it in the South.

It should be no more acceptable to wave a Confederate flag in the United States than it is to fly a swastika. No more acceptable to proclaim yourself sympathetic to the Confederate cause than to proclaim yourself a supporter of ISIS. There is no moral difference. None. These are the banners of the enemies of our nation and of our ideals—enemies whose existence is based on inequality and subjugation.

Filed under Adult Traumas, All The News You Need, All We Are Saying Is Give Peace A Chance, Bat-shit crazy, Beating that Dead Horse, Campaigning, Cancer on Society, Crazy Folks Running, Criminal Activity, Disgustology, Elections, GOP, Gun control, History, Huh?