Been There, Done That

Time to invoke the 25th Amendment.

How Be a Friend

It’s International Holocaust Remembrance Day. And so, of course, Putin’s President, with the irony born of someone without a soul or a keen eye for history, chose today of all days to ban Muslims from entering the U.S.

Naturally, that means anybody who “looks” Muslim will become even more of a target than they have been since Trump took us all down the gold escalator into hell.  It is now open season on “others” here in our nation of immigrants.

So what can we do about it?

I will admit that the safety pin movement left me feeling decidedly unhelpful.  It’s a nice thought, but it never made me feel like I was actually standing up for anyone.  Or like I was doing something to help people being targeted.

But a while back I saw this article that offered some practical suggestions that have some meat on the bones.  Really!  Click on the link.  Cause I’m not going to tell you everything it says.

Anyway, I like to think that I would be the kind of person who would stand up in any situation to protect those in need.  But frankly,  I’m overweight, slow moving, and cowardly.  They don’t make superheroes who look or act like me.  So the odds are NOT in my favor.  Besides, when something happens around me, I never have a clue what’s happening.  I generally stand there, looking around, confused.  Immobile.  Saying “WTF” with my mouth hanging open.  Quick witted I may be with words, but actions?  Not so much.

But the Vox article showed me a way to help when someone is being verbally assaulted, in situations where I am most likely to see it happen.  It’s brilliant.  And relatively safe.  Win-win.

Here’s an example.  Say you’re in Target, passing by the children’s section, when you hear a man harassing a woman in a hijab.  He’s big and burly, and you want to help. You also don’t want him to target you.  Still, you can’t just walk away, turn a blind eye.  You’re a good person!  You wouldn’t be able to look yourself in the mirror if you didn’t help.  But how?

You interrupt the jerk.  Wander in between him and his victim as if you’re looking for something, and can’t quite find it.  Request his help.  Be totally oblivious.  Give the poor target the opportunity to get away.  Think Roseann Rosanna Dana. 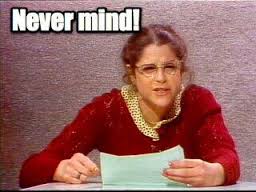 Or, in an equally ditzy way, pretend to be the friend/shopping buddy of the woman being mistreated, and in an oblivious way whisk that woman out of the children’s department and into the table linens.

“Sylvia!” said in the most nasal tone imaginable, “THERE you are.  You were supposed to meet me in the shoe department … you come with me right now before they’re out of the size 7s…”

Read the article.  Learn steps you can take to help folks who may really need your help.  Because it’s a Brave New World out there.  And it helps to be prepared.

Today of all days, it’s important to recall these words, from the U.S. Holocaust Museum:

The Holocaust did not begin with killing; it began with words. The Museum calls on all American citizens, our religious and civic leaders, and the leadership of all branches of the government to confront racist thinking and divisive hateful speech.

Filed under 'Merica, 2017, Adult Traumas, All The News You Need, All We Are Saying Is Give Peace A Chance, Assholes, Bat-shit crazy, Being an asshole, Cancer on Society, Clusterfuck, Cool people, Cyber Brownshirts, Disgustology, Ditzes for Justice!, Don't Make Me Puke, Fuckin' Donald Trump, History, How the Hell Did We GET HERE?, Humor, Insighting violence, Just Do It and I'll Shut Up!, Make Resistance Fun, Mental Health, Negotiating, Not My President, Not something you hear about every day, Oh shit, Passive Aggression, Peace, Putin's President, Racists, Saving the World, Shit happens, Stupidity, Taking Care of Each Other, Trump is a Putz, Trump Legally Declared a Slug, What a Maroon, Wild Beasts, Witnessing Harrassment, WTF?

But people do.  When Donald Trump Tweets, others act.

We’ve all heard the stories.  Most recently it was this one:

Chuck Jones, who is President of United Steelworkers 1999, has done a terrible job representing workers. No wonder companies flee country!

What happens after Trump Tweets?

Threats.  In phone calls, on social media, in the mail.

Trump himself doesn’t threaten.  Like the folks who clean his toilets, he has people for that.

“Cyber Brownshirts” will do the dirty work.

I know he’s a Hitler Youth, not a Brownshirt.

Two occurrences in the same neighborhood really point out the difference between reactions of members of the two different parties.

Vice-President Elect Mike Pence has moved into a short-term rental house in the mostly democratic Chevy Chase neighborhood of DC.  When residents realized he was living there, the reaction was this, courtesy of the Washington Post:

Photo courtesy of the Washington Post, (taken by Gary Cameron/Reuters)

They put out rainbow flags.

The other occurrence took place at a restaurant in the same neighborhood, a pizza place called the Comet Ping Pong.  As written up in the Washington Post,

A North Carolina man was arrested Sunday after he walked into a popular pizza restaurant in Northwest Washington carrying an assault rifle and fired one or more shots, D.C. police said. The man told police he had come to the restaurant to “self-investigate” a false election-related conspiracy theory involving Hillary Clinton that spread online during her presidential campaign.

This restaurant was the subject of false news accusations that Hillary Clinton was running a child sex ring from the restaurant’s bathrooms.  (Who the hell believes such stupidity?)  Other than  General  Mike Flynn, soon to be Donald Trump’s National Security Adviser:

A D.C. police report made public Monday says Welch had been armed with an AR-15 assault-style rifle. The report also says police seized a Colt .38 caliber handgun and a shotgun. One of those weapons was found inside the restaurant; the other in the suspect’s car.

Filed under 'Merica, 2016, 2nd Amendment, ; Don't Make Me Feel Perky Tonigh, A Little Restraint, Perhaps, Adult Traumas, All The News You Need, All We Are Saying Is Give Peace A Chance, Ammosexuals, Clusterfuck, Do GOP Voters Actually THINK?, Gun control, Huh?, I Can't Get No, Insighting violence, Kakistocracy, Mike Pence, My Right to Protest, Neighbors, Peaceful Protests, Shit Your Pants Scary, Trump Legally Declared a Slug, Washington, What a Maroon, What a Putz, Where does the GOP get these guys?, Wild Beasts, WTF?