Sometimes a metaphor actually plops into your lap.  Or your hands.  Or into someplace you hope you don’t drop your cell phone.

That happened to me today, when I read an article in the Huffington Post about one of the, ahem, priorities, of the folks setting up Friday’s Inauguration of Donald J. Trump.  And really, it is a metaphor for what is to come.

You see, whenever there is a big event here in the DC area, there’s a lot of shit going on.  Literally.  Lots of people = lots of pee and poop!  So port-a-potties line the Mall, surround the Monuments; and ring the Capitol itself.  And in the DC area, one company has the scoop on poop.

When I saw that headline, my first thought was, “Of course they are.  They’re covering up all kinds of shit.”  But this time they’re not covering up the shit, but the name.

THAT is how we will survive Trump.  Because you can’t paper over the truth for long.

Filed under 'Merica, 2017, ; Don't Make Me Feel Perky Tonigh, A Little Restraint, Perhaps, Adult Traumas, All The News You Need, Ammosexuals, Bat-shit crazy, Beating that Dead Horse, Being an asshole, Cancer on Society, Chronic Disease, Clusterfuck, Criminal Activity, Curses!, Cyber Brownshirts, Disgustology, Do GOP Voters Actually THINK?, Don't Take My Medicare, Donald Trump, Donald Trump is a Pussy Too, Dying Dreams, Elections Matter, Farts, Fuckin' Donald Trump, Global Warming, Goats, Good Works, GOP, Hands off My Medicare, Health and Medicine, History, House of Representatives, How stupid can you be, GOP?, How the Hell Did We GET HERE?, Huh?, Humor, I Can't Get No, Just Do It and I'll Shut Up!, Kakistocracy, Longing for Dick, Mental Health, My Right to Protest, Nobody's gonna excavate my poop. I hope., Not My President, Nuremberg Trials, Oh shit, Out of the Pot, Peaceful Protests, Planned Parenthood, Political Corruption, Poop, Saving the World, Shit Your Pants Scary, Shit! The Perfect Metaphors for the GOP, Shitty GOP, Taking Care of Each Other, Toilets, Trump is a Putz, Trump Legally Declared a Slug, Trump Mis-Administration, Useful thing to do with poop, Washington, What a Maroon, What a Putz, What must folks in other countries be thinking?, Where does the GOP get these guys?, Where is Joseph McCarthy when we need him?, Wild Beasts, Women Should Decide Women's Health Issues, WTF?

Tagged as Covering over the truth, Don's John's, Don't you have a country to run?, Oh shit, Pull off the paper, Really?

Two occurrences in the same neighborhood really point out the difference between reactions of members of the two different parties.

Vice-President Elect Mike Pence has moved into a short-term rental house in the mostly democratic Chevy Chase neighborhood of DC.  When residents realized he was living there, the reaction was this, courtesy of the Washington Post: 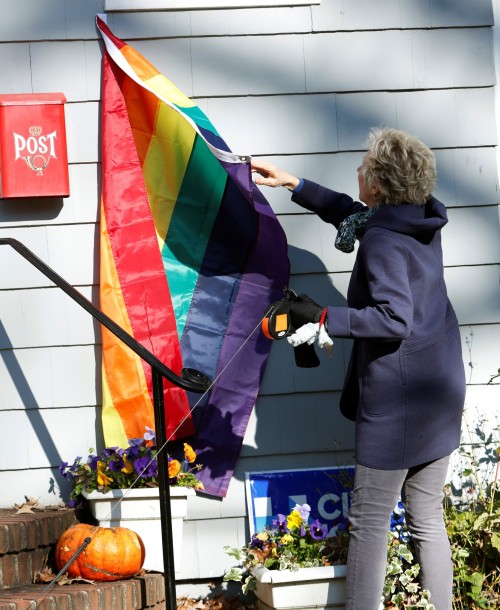 Photo courtesy of the Washington Post, (taken by Gary Cameron/Reuters)

They put out rainbow flags.

The other occurrence took place at a restaurant in the same neighborhood, a pizza place called the Comet Ping Pong.  As written up in the Washington Post,

A North Carolina man was arrested Sunday after he walked into a popular pizza restaurant in Northwest Washington carrying an assault rifle and fired one or more shots, D.C. police said. The man told police he had come to the restaurant to “self-investigate” a false election-related conspiracy theory involving Hillary Clinton that spread online during her presidential campaign.

This restaurant was the subject of false news accusations that Hillary Clinton was running a child sex ring from the restaurant’s bathrooms.  (Who the hell believes such stupidity?)  Other than  General  Mike Flynn, soon to be Donald Trump’s National Security Adviser:

A D.C. police report made public Monday says Welch had been armed with an AR-15 assault-style rifle. The report also says police seized a Colt .38 caliber handgun and a shotgun. One of those weapons was found inside the restaurant; the other in the suspect’s car.

Filed under 'Merica, 2016, 2nd Amendment, ; Don't Make Me Feel Perky Tonigh, A Little Restraint, Perhaps, Adult Traumas, All The News You Need, All We Are Saying Is Give Peace A Chance, Ammosexuals, Clusterfuck, Do GOP Voters Actually THINK?, Gun control, Huh?, I Can't Get No, Insighting violence, Kakistocracy, Mike Pence, My Right to Protest, Neighbors, Peaceful Protests, Shit Your Pants Scary, Trump Legally Declared a Slug, Washington, What a Maroon, What a Putz, Where does the GOP get these guys?, Wild Beasts, WTF?