I’ll Take That as a Compliment

Dr. C wiped a tear from her eye, hugged me and laughed as she walked me out of the examination room after my semi-annual tune up the other day.

“I have never had this much fun during a consultation, Elyse,” she said.

“I’ve been keeping up with all the research on poop transplants,” I told her.

Even though they aren’t currently being used for IBDs like mine, well, I do keep up with the research.  Obviously, you do too.  Why else would you be reading this post about poop?

How could I resist this image?  I know it’s Canadian and they have single-payer health care and I don’t, but you will admit, it’s funny.  Thanks, Google Images. You’re the bomb.  Errr…

Did I lose you there?

Our discussion continued down that same hole …

“I actually have a patient who had a poop transplant.  She had c difficile,  and the transplant came from a heavy person.  She’s actually gained a lot of weight!”

“I used to think I’d get one from my husband.  But he’s kind of a curmudgeon, and he has risks of a couple of other diseases that I don’t want to get.* But mostly it’s the curmudgeon thing.  I don’t want to become a crank.  Besides, he refuses to laugh at my jokes.  Since I’m often the only one laughing, taking his shit might make my career as a humor blogger short-lived.”

“You’ll have to just tell him to keep his shit to himself!” Dr. C said, roaring with laughter.  Suddenly she realized, oh shit!  I’m talking to a patient!

“‘My doctor says you have to keep your shit to yourself!’ — That’s what I’ll tell him!  –Maybe then, he’ll stop leaving his crap all over the kitchen counter!” 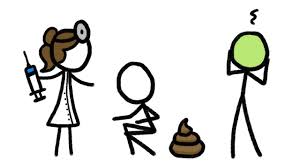 I looked over at her.  She’s healthy.  She’s slender.  She’s smart.  She has curly hair like mine.

“I want a poop transfer from you!” I announced.

She quieted her laugh for a moment.

“You know, that may be the nicest thing anyone’s ever said to me.”

We both roared with laughter.

“Great. Lemme know when they figure out that poop transplants really do work on Crohn’s.  I’ll bring the sterile cup.” 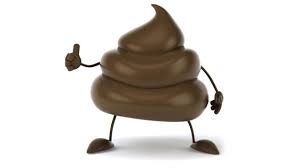 Where do you think I found this?

* Nobody can say I don’t protect my husband’s privacy.  Ammirite?

While this blog was awaiting publication, I found this article in my inbox:

Commensal bacterial living in the gastrointestinal tracts of cockroaches lace the insects’ feces with chemical cues that mediate social behavior, according to a study.

47 responses to “I’ll Take That as a Compliment”