Earth Day.  The Science March (which I sadly can’t attend until Science gets around to curing my damn Crohn’s Disease).  My late sister Judy’s birthday.  So I’m reposting this.  Hey – Jude believed firmly in recycling!

She’s been gone now for 17 years, Jude.  Not a day has gone by since that I haven’t wanted to talk with her, laugh with her, or, alternatively because she was my sister, smack her.  There really isn’t a relationship like you have with a sister.  Even long after they are gone.

It would also be my late sister Judy’s 65th birthday.

But years later, Judy took recycling to a whole different level when she helped people recycle themselves.  In the 1990s, Jude, who was then living in Florida, began working with the Homeless, assisting at shelters.   Then she actively began trying to help homeless vets food, shelter and work — to enable them to jump-start their lives.

You see, the night the Beatles were on Ed Sullivan, it was MY turn to choose what we were going to watch.  And we were going to watch the second part of The Scarecrow of Romney Marsh starring Patrick McGoohan on the Wonderful Wide World of Disney.  My four (all older and MUCH cooler) siblings were furious with me.  But I was quite insistent.  You might even say that I threw a Class I temper tantrum over it, but I wouldn’t admit to that.  Hey, I was seven.  And it was my turn to choose.  Fair is fair, especially in a big family with only one TV.

Keeping Our Heads for Four Years

If you were a news junkie during the George W. Bush era, you’re already experiencing deja vu.  That sinking feeling already makes your eyes roll automatically when Putin’s President appears.  It settled into the back of your neck from the whiplash as you shake your head and shout “no, no, no, no, no, no, no!” over the latest outrage or tweet.  And it’s there in the pit of your stomach, when you try not to vomit whenever you see the color orange.

During the Bush years, I would just be ready to pounce on one issue, when another hit the fan and took the wind out of my sails. Resistance is hard if there is just so much to resist.

How, I worried in the days since November 8, will I survive Trump.  I feared a heart attack.  A stroke.  Getting so scared I’d shit in my pants.   Of course I worry about the last one sometimes during a scary movie.

Anyway, I’ve come up with a strategy for a hybrid Resister/Surviving Human.  I’m going to become a political centaur!

Google Image.  No shit will be given by this filly.

I’m going to take my mother’s marital and parental advice and apply it to my activism.  She said:

Me, I’m going to try to focus on issues I know about and/or that are closest to my heart.  The ones I write about here on FiftyFourAndAHalf.

But that won’t be all I do.  I will look for and follow the lead of others who are knowledgeable about other issues, and I will try to help to the extent I can.  It’s not hard, really, to make calls to Congress and the White House.  Really, it just takes a minute.  You or I can even just cut and paste and hit “send.”

But I will try my very best to keep my blood pressure — and my outrage to livable levels.

George W. Bush kept us all off balance because there were so many things to be outraged about, that we couldn’t keep it up.  Different bad presidents need different tactics.

And Trump will make the Dubya years look like a walk in the park.  And that park is in Baghdad.

Filed under 'Merica, A Little Restraint, Perhaps, Abortion, Adult Traumas, All The News You Need, Bat-shit crazy, Cancer on Society, Chronic Disease, Curses!, Disgustology, Do GOP Voters Actually THINK?, Don't Make Me Puke, Dying Dreams, Elections Matter, Fuckin' Donald Trump, Good Deed Doers, Good Works, Gross, Gun control, Hands off My Medicare, Health and Medicine, House of Representatives, How stupid can you be, GOP?, How the Hell Did We GET HERE?, Huh?, Hypocrisy, I Can't Get No, Just Do It and I'll Shut Up!, Kakistocracy, keys to success, Mental Health, My Right to Protest, Not My President, Oh shit, Planned Parenthood, Political Corruption, Politics, Saving the World, Shit happens, Shit Your Pants Scary, Shitty GOP, Size Matters, Taking Care of Each Other, The Real Red Scare, Tom Price, Trump is a Putz, Trump Legally Declared a Slug, Trump Mis-Administration, Useful thing to do with poop, Washington, What a Maroon, What a Putz, What must folks in other countries be thinking?, Where does the GOP get these guys?, Where is Joseph McCarthy when we need him?, WTF?

PICK UP THE PHONE, PLEASE

What the hell.  Do this.  It is just one of the ways we can express our feelings about the fact — yes FACT — that the Russians influenced the 2016 American election.

The entire reason that the Electoral College exists is to protect our nation from an unqualified candidate.  Sooo….

From the Daily Kos:

Call the White House: Brief the Electoral College on Russia’s sabotage before December 19

The CIA has said that the Russian government sabotaged this election with the express purpose of aiding Donald Trump. Such foreign interference is exactly what the Founding Fathers feared when they set up the Electoral College—as a final buffer before electing the President of the United States.

Before the Electoral College meets on Monday December 19, President Obama must declassify any and all relevant intelligence to Russia’s interference—and officials must brief the electors before they make this decision.

I am requesting that President Obama declassify any and all intelligence related to Russia’s interference of the presidential election—and to brief all members of the Electoral College before they meet on Monday, December 19.

Daily Kos wants you to let them know how it went.  But frankly, I’m only asking you to make the one call to the White House.

Do I think this will work?

Do I think that enough electors will change their votes?

Do I think that Hillary will become president?

Sadly “No” is the answer to all of these.

But I don’t know about you, but I must speak up (while I still can).  For all the things that are important to me that I yammer on about all the time on this blog.

Again and again — we all must speak up.  It’s time to get used to using our loudest, most effective protest voices — not our inside voices.  We’re going to be calling this number a whole lot in the next few years.

Image from IMBd.  I’m pretty sure that Putin and his Pals are not the nice Russians that arrived on our shores in this 1968 movie.  Positive.

UPDATE!!!  The phone lines are very busy.  You can also email, but calling is better:  https://www.whitehouse.gov/contact.  Or do BOTH!

Please share this so that as many people call as possible.

As you may know, today the Shuttle Discovery took its last flight, from Florida to here in DC, where it will go on display at the Smithsonian Air and Space Museum’s Udvar-Hazy Center in Chantilly, Va.

But first it did a victory lap around Washington, DC.  From my office perch across the Potomac, I had a window on the flight.  These pictures were taken by my colleague, Julie Pearce. 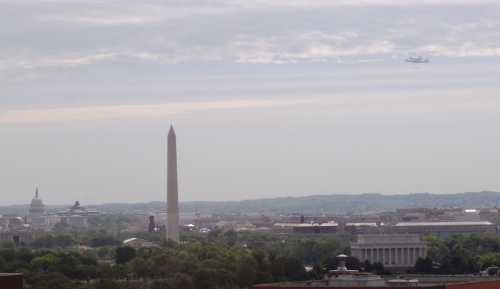 And yup, I’m a lucky girl; I get paid to sit here.