They always come off the shelf at this time of year.  The Harry Potter books.  I’ve read and re-read all of them until the pages are worn and grimy.  They give me comfort when I am fighting off “The Missing.”

“When I find myself in times of trouble …”

Go ahead and laugh.  But I honestly mean that the Harry Potter books — kids books — help me fight off the sadness of missing people.

You see, in Harry Potter, the folks Harry loves and has lost get to come back sometimes.  Once in every few books. OK, in the first, the fourth, and the seventh.  What — you need page numbers?

And each time I read how they, those dead people, give Harry courage, I find my own again.

And you know what especially makes a difference?  Throughout the entire series, folks talk normally about people who have passed.  Just as if they were, and still are, an important part of a person’s life.  The characters do, and are expected to, think about people who are no longer around.  Grief, missing them is part of life; an acknowledged part.

Real life, however, outside of books, is not at all like that.  The bereaved are allowed 1 week to 1 year to grieve, depending on the relationship and the circumstances.  Within that time, and especially way beyond it, talking about a lost loved one is awkward. It makes other people uncomfortable.  They don’t know what to say.  What to do.  Where to look.  It’s taboo.

Death in our society pretty much wipes a person off the slate — we say good-bye, are moved to shed tears, and then expected to get beyond it.  We are essentially expected to metaphorically “unfriend” them.

Of course, we all fear our own death, so we don’t want to talk about someone else’s death.  We just can’t deal with someone else who has gone to that wizarding school in the sky.

Reading Harry Potter helps me feel like my missing are close by.  Let’s me feel that there are folks, even if they are fictional, who let me remember and who also remember their own loved ones.  Very much like my bloggin’ buddies, who let me lean on them from time to time.  For which I will be eternally grateful.

It’s coming on the anniversary of my sister Judy’s passing, a time that is always difficult for me.

Judy too was a Potterhead, although she only lived long enough to read the first three books. I’m quite sure that that is one of the things that most annoyed her about dying, actually.  Nobody likes to miss the ending.

So I’m really hoping she’ll hook up with Alan Rickman pretty soon.  Because she’ll show him the ropes, and he’ll fill her in on the rest of the story.  A match made in, well, heaven. 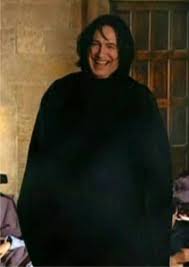 R.I.P. to so very many people gone way too soon.

Thanks to Deb of The Monster In Your Closet for making me come out of my closet as a Potterhead!

58 responses to “Times of Trouble”