There IS a Difference

Periodically, I take some heat here at FiftyFourAndAHalf for being one sided in my political commentary. For not saying nice things about the GOP.  There is some validity to those charges.  My bad.

But, frankly, there are loads of folks who write up the other side. I have said that if the Republican Party hadn’t taken Ronald Reagan’s “The Government IS the Problem” quite so much to heart, well, things might be different.  I might be different.

But as things turned out, you see, well, I’m a liberal. An unapologetic liberal.

When I look at today’s GOP (which is very different from the pre-Reagan GOP) I am astonished that there are folks who go along with the things these folks are advocating.  They’re cra-cray!

Only today, Governor and GOP Presidential hopeful Scott Walker announced that he might just have to bomb Iran his first day in office.  You know, before he knows were the bathrooms are in the White House.  The minute he gets near the button, well, he might just push it.

Some newly elected prezes watch a parade and dance at the Inaugural balls. But not Scott!  Nope!  Nope, he will inaugurate his own balls by starting a fucking war.

Where the hell do you think I got this one?

Even ¿Jeb!, the brother of the last GOP guy to bring us a stupid war, thought that Scotty was going a wee bit too far:

One thing that I won’t do is just say, as a candidate, ‘I’m going to tear up the agreement on the first day.’ That’s great, that sounds great but maybe you ought to check in with your allies first, maybe you ought to appoint a secretary of state, maybe secretary of defense, you might want to have your team in place, before you take an act like that.

At a press conference after his appearance at the Family Leader Summit here Saturday, Walker was asked if he thinks Bush is wrong. “He may have his opinion. I believe that a president shouldn’t wait to act until they put a cabinet together or an extended period of time,” Walker said.

This is not a man who thinks he might have to react to a 9/11-like attack. This is a man with no military experience except the fucking Boy Scouts, And he is planning to go to war on January 20, 2017.

Personally, it gives me a feeling of déjà vu: 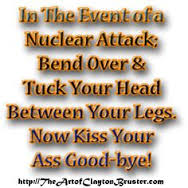 Contrast that with the Democrats. They just negotiated an historic agreement to avoid war. To see what we can do to not destroy the planet. Well done, Blue Team!

Wendy Sherman, Undersecretary of State for Political Affairs who was involved in the negotiations, described what happened after the deal was concluded. After the cameras and the reporters were gone.

[E]ach of the foreign ministers of the P5+1 group – the U.S., Britain, France, Russia, China and Germany – and Iran “made a statement about what this meant to them.”

“All of the remarks, by all of the ministers, including [Iranian Foreign] Minister [Javad] Zarif, were very moving, because it was private, and it was about what this deal meant to them.”

But the last spot was reserved for John Kerry.*

“He couldn’t get the words out,” [Sherman] recalled. “And everybody was completely spellbound.”

Kerry composed himself and continued, “I went to war and it became clear to me that I never wanted to go to war again.”

Do you have kids?  Grand kids?  Siblings who might be called upon to fight?  Which side should you be supporting?

So I am unapologetic about supporting the folks who believe that before going to war, they should work for peace.

I had the poster. I had the necklace. Google has the image.

* Kerry would have made a fine president.

Filed under 2016, Adult Traumas, All The News You Need, All We Are Saying Is Give Peace A Chance, ¿Jeb!, Bat-shit crazy, Campaigning, Cancer on Society, Crazy Folks Running, Criminal Activity, Disgustology, No More Bushes, Scott Walker, Scotty destroyed Wisconsin, Shit

The Sounds of Peace

On the Friday after the World Trade Center fell, I was in Geneva, Switzerland, attending what was billed as a “silent” march.  Citizens of the world came together there in Geneva to show solidarity with we devastated Americans.  We walked la Place des Naçions, through the area of Geneva that is home to a dozen or so international organizations.  Organizations that promote peace, international cooperation, and help for our fellow man.

That day, people from every country on the planet, it seemed, marched to show their opposition to the hatred that attacked America and destroyed the towers.

But it was anything but the “silent” march planned.  Instead, I was surrounded by thousands of voices, speaking in sympathy, in harmony, in defiance of evil.  The voices spoke in a thousand languages in righteous anger and solidarity.

It was the sound of peace.

I hadn’t heard that sound of peace again until last night.

Sometimes I forget that some of my ancestors came from other lands with other languages.  Sometimes we all forget that we are a nation of immigrants.  A nation that was built on the blood, sweat, tears and dreams of people from everywhere.

Filed under History, Humor, Neighbors, Taking Care of Each Other