Way Too Many Ducks

A little while ago, my husband, John, nearly made me vomit.

That’s no easy task, as I have a really strong stomach — it makes up for my shittier lower GI system.

Did he make an unappealing meal?  Drive around curves like a maniac?  Take me out on a boat in choppy water?

He read the news today (oh boy).  And he felt compelled to share.  That’s when I got nauseous.

Maybe I need to back up here.

You don’t know this, but John loves the theater.  Drama.  Shakespeare.  Comedies.  He loves to go to plays.  He has, in fact, penned a couple of them himself.  But he hates, hates, hates, musicals (with the notable exception of Les Miserables).

So today, after reading the news, he informed me that we have to go see a new musical that will be coming to Broadway.

I was immediately suspicious — once again proving that I am smarter than the average bear.  It had to be different from the usual musical fare to get John’s interest.

And different, this musical certainly is.  The musical that John wants to see on Broadway is called

It is the rags to riches story of the Duck Dynasty folks.  On Broadway.  The cost of barf bags will no doubt be included in the ticket price.

First, however, it will play the Rio, the Las Vegas theater where the Chippendales normally perform (with significantly less unsightly hair).  Because, you know.  Vegas.

Is it too much to ask that this group of hyper/pseudo Christians will have a special audience?

Lions would do nicely, thank you very much.

Am I the only one who simply doesn’t understand the fascination with these vile humans? 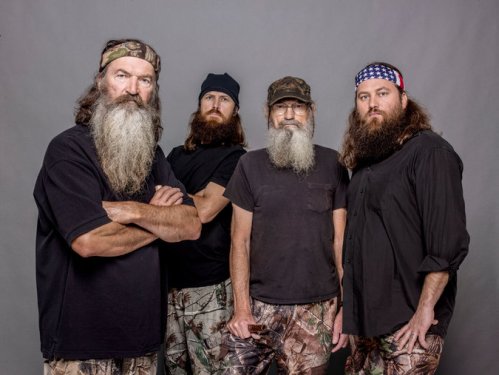 77 responses to “Way Too Many Ducks”