You probably know that I love me a bargain. Some times, I just can’t resist. Cheap stuff. Buy one get one for 50% off! Two for the price of one! Seventy-two rolls of Charmin!

So when I heard that former Senator Jim DeMint (R-Shouldda Never Let Him Into Guv-ment-SC) talking about free ultrasounds on the TeeVee, well, I decided right then and there that a bargain is a bargain.

The fact that I believe in keeping government out of my lady-parts should not get in the way of me getting free stuff.

The fact that I am not pregnant should not stand in the way of me getting free stuff.

The fact that I am post-menopausal should not stand in the way of me getting free stuff.

When something is free, well then I want one. Because it’s a bargain, right? For everybody.  Especially those folks who want to look in my vagina.  I imagine there is quite a line.

What’s everybody complaining about? 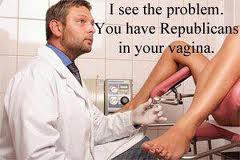 It is election season here in Virginia.  In fact, it always seems to be election season in Virginia.  We have elections just to show off Virginia’s historical connection with the U.S. Constitution – Madison, for example, was a Virginian, and he wrote most of it.  Jefferson, another Virginian, wrote him letters from Paris with helpful hints on how to write something that would one day be put into a really cool frame.  George Mason was in on it too, so were a whole bunch of other Virginians we all learned about in grade school.  Folks from other states had their fingers in the pot too, Virginians admit, but only when pressed.

But Virginia still takes its voting rights very seriously.  So we have elections frequently just because we can.  It is now mid-October and I’ve already voted twice this year. We will, of course vote again on the 1st Tuesday in November.   Yay.

Actually, I don’t really mind.  I vote in every damn one of them.  I value my right to vote.  Even more so since 2000 when I was living in Europe and my absentee ballot didn’t show up.  You know what happened – George W. Bush became President.  The world went to hell in a handbasket.  If only my ballot had shown up, things might have been different.

For a while, I blamed myself – until, of course, I realized that my absentee ballot would not have been for a vote in the Supreme Court.  Damn!  I want to get one of those, but I’m not quite sure where to apply for it.  In fact, the longer John Roberts remains Chief Justice, the harder I’m going to try to find a way to get a vote there on the Supreme Court.  One of those awesome black robes would be pretty cool, too.

So now that it is just a few weeks away from the next election, the political signs are out all over the place.  Big clumps of them at every corner.  A big mish mash of signs advertising people I’ve heard of and people I haven’t, for positions I have never heard of either.  What does a delegate do?  Or a county supervisor.  Who does he/she supervise?  And if they need to be supervised, shouldn’t we just get rid of them?

This time around, there are also candidates running for School Board, and one candidate made me nearly get out of my car and knock over each and every one of his signs on principle.  Or maybe on principal.

Why?  Because the guy is not running

Is it just me, or should folks on the school board know how to spell those sound-alike words?

The sign made me realize that, yes,  it IS bad when the Supreme Court overrules the popular vote of the country.  But when you start out with a school board full of cretins who cannot distinguish between “for” and “four” (and probably “there, their, and they’re”), well, that’s when you can pretty much be sure the next generation is going to be dumber than we are.

You can vote on it.