My mother used to caution me:

“Be careful what you wish for,” she’d say.

Her response usually baffled me.  As a kid growing up in what I thought was abject poverty (ummm, not even close), I felt like I never got what I asked for.  Or if I did, one of my four siblings had used it first.  Or “it” didn’t really live up to my expectations.  Or getting “it” not precisely what I expected.

Getting what I asked for always held a surprise.

You know what?  Mom was right.  And it is just as annoying now as a grownup as it was when she was right when I was a kid.

You guys know that recently I got what I asked for:

Yup, here is an update on Duncan, that fluffy little guy who gave us such a scare last week when we brought him home.

He came with teeth!  I knew that he would, but I had forgotten what it felt like to have razor sharp puppy teeth inserted into my arms.  Or my legs.  Or, during one memorable cuddle, into my nipple.

He came full of energy!  I knew that he would.  But I had forgotten just how much.  And how much energy went into those teeth.

He came determined to destroy my house.  I knew he would.  But I had forgotten just how many times I can say “no — chew on this”  during a single hour.  4,682 times to be exact.

Yes, this is a brief Duncan update — he is doing great.  He is full of mischief, sharp teeth and a desire to rule the world — or at least the household.  John, Jacob and I are holding our own, but it is only a matter of time before Duncan realizes that he is King Duncan.  And while none of us would ever murder him, I’m not sure I want Duncan to know that just yet.  At least not until he loses those teeth. 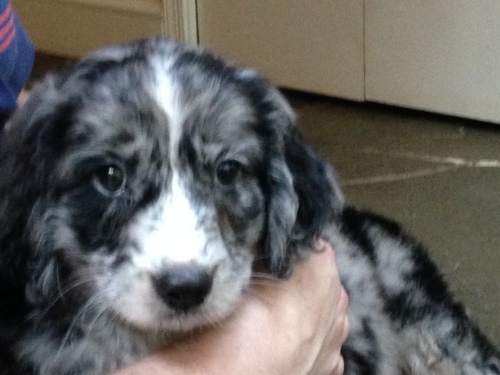 Who you gonna believe? I’m an Angel. (Well, except when I’m a Demon.)

Thank you all for your concern about the cute little guy.

I really did get what I asked for.  And Mom?  He’s wonderful!