You may find this surprising, but today I agree with former Arkansas Governor Mike Huckabee (R-12th Century). 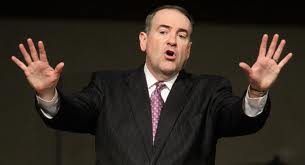 Lead me not into temptation
(Photo Credit Salon.com)

According to today’s Washington Post, Huck knows him some women.  And so he can point the way for his entire party, nay, the entire country, to make women ummmmmmm, Man Up.

We women, especially those who live close to the economic edge that GOP policies and politics have placed us at, don’t have any control over our libidos.  And so we need “Uncle Sugar” to massage our needs with free birth control. Covered under Obamacare.  The nerve of women to want to avoid pregnancy, avoid abortion, avoid abject poverty for the remainder of their lives.

Wanting to avoid co-pays.  The scum.

[Text provided cause I know you aren’t gonna click on that link and for some reason the video won’t embed]:

Former Arkansas governor Mike Huckabee (R) said Thursday that Republicans need to take a more combative attitude toward winning the votes of women, by emphasizing that women aren’t weaklings in need of help from the government.

“I think it’s time Republicans no longer accept listening to the Democrats talk about a ‘war on women,'” Huckabee said during a speech at the Republican National Committee’s winter meeting in Washington. “The fact is the Republicans don’t have a war on women, they have a war for women, to empower them to be something other than victims of their gender.” […]

Huckabee said Democrats tell women “they are helpless without Uncle Sugar coming in and providing them for them a prescription each month for birth control because they cannot control their libido or their reproductive system without the help of government.”

I want to shout:

I am so tired of Huckabee and the rest of the male-dominated GOP that is hell bent on keeping as many women in poverty as possible.  Barefoot and pregnant, that’s how they like us.  And so I repeat:

and the Horse You Rode In On

Of course, now I will be accused of bestiality AND being unable to control my libido.

And I gotta figure out just exactly how this jives with yesterday’s enlightening story about Rep. Steve Pearce (R-NM) who believes that a wife is supposed to “voluntarily submit” to her husband.  Life must be damn confusing for Republican women.  The two who are still Republicans, that is.