What’s In A Name?

Shakespeare never had a dog.

No, if he’d had a dog he would never have had Juliet say “What’s in a name…”

Because you see, there is something about naming a dog that makes people choose poorly.

I was reminded of just how poorly recently at the park.  John and I were walking our dog Cooper by the river when we came upon a couple with a Giant Schnauzer walking in the opposite direction.  Their dog and Coops had met before, but I hadn’t asked the dog’s name.  This time I did.

I fussed over Gladiator, petted him, let the dogs sniff and even smooch a little bit and then we continued on our way.

As we walked away, I chuckled to John, “Oh I remember feeling like that.”

“Embarrassed to have to introduce my dog,” I responded, thinking of Goliath, my alcoholic German Shepherd.  (John will never stop laughing at me for having chosen that name.)

It was a stupid name.  And I chose it.  For the first time in my life, I had a pet with a stupid name and I couldn’t blame someone else.

Well, I could, actually.  And I did.  You see, I had brunch with some friends one Sunday.  We were talking about Saturday morning cartoons, what we liked, what we didn’t like when Frank brought up “Davy and Goliath.”  For the folks in the room, Frank described Davy and Goliath:

“It was a Christian-based show where Davy, the boy, always wanted to do something a little bit wrong or dangerous.  His dog, Goliath, served as his guardian angel.  Whenever Davy wanted to do something of questionable intelligence, Goliath was always there saying ‘I don’t know, Davy,’ and tilting his head to indicate that the idea was pretty stupid. “

I realized then and there that I wanted a guardian angel.  I wanted someone who would protect me and stop me from doing stupid things.  I wanted ‘Goliath.’

Fortunately, a few days later, I found him.  My dream dog.  A German-shepherd/Malamute mix puppy who was about 4-1/2 months old.  Trouble was, he was a wee bit psychotic.  And huge.  Unfortunately, I DID name him “Goliath.”  (Goliath I am sad to say became an alcoholic.  I wrote about it here.)

I loved that dog.  But almost immediately I hated introducing him, because he grew into his name.  He was huge.  And having a huge, psychotic dog named Goliath doesn’t get you into the best parties.

Naturally, I blamed Frank the next time I saw him.  It was, after all, all his fault.

It wasn’t my first experience with a stupid dog name.  Growing up, my father had for reasons nobody ever really understood, named one of our dogs Oklahoma.  None of us had ever been there; we speculated years later that perhaps there was a college football game on TV.  No, Dad would never tell us why, but we had a dog named Oklahoma.  Okie for short.

Next time around, my brother Fred was in his hippie, metaphysical stage.  I will not say that drugs had anything to do with the fact that he named our next dog Klingsor, after a Hermann Hesse novel.  I was always a little bit thankful that the dog’s name wasn’t Siddhartha, although that would have made me a hit with a certain crowd.  Dad, however, in a rich bit of irony from the man who named Oklahoma, thought it was a stupid name and modified it.  Dad always called Klingsor “Mr. Klink,” after the colonel on Hogan’s Heroes.

For sheer embarrassment at the back door, though, my friend Keily had a dog with another ridiculous name.  Her sister had been given the honor of naming their puppy, and Rose thought that she should name it after something she loved.  She named the dog “Baseball.”

They hear you calling “GOLIATH!” and become convinced that you do, in fact, need a guardian angel.  Or a straight jacket and a padded cell.

As the owner of one of these dogs, you want to hide under a rock.  You want to pretend you’re dog-sitting.  You want to let everybody know that you didn’t give that dog that stupid-ass name, even if you did, in fact, give it to him.

You know how you’re supposed to learn from your mistakes?  Well, dog owners don’t necessarily.

After Goliath died, John and I of course needed a dog.  Jacob was a year old, and we researched big dogs that are good with kids.  We decided to get a Bernese Mountain Dog because they’re great with kids, beautiful, and tend to not try to kill the mailman like Goliath did.

It was of course the olden days.  Before email, the interwebs, and modern communications.  We found a breeder who had a puppy.  She sent a picture to us by mail, to see if we were interested in driving 5 hours to see him in person and possibly take him home.   I ripped open the envelope the minute it arrived and called John:

“He is the cutest puppy in the world.  We have to get him.

And we have to name him “Adolf.”

I can still imagine John sitting at his office desk, pulling back the telephone receiver and looking into it thinking “I married a mad woman.”

But tell me, what would you have thought if you’d received this picture: 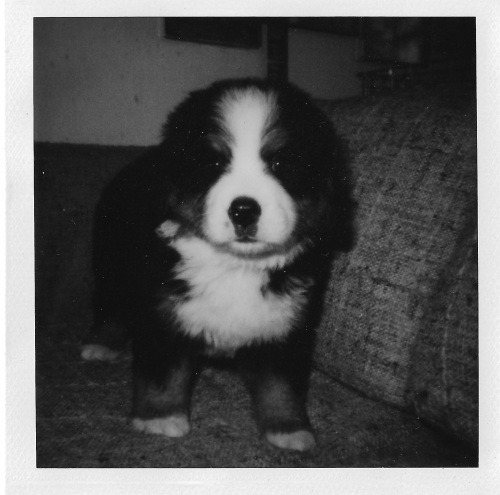 I mean, really now. What would your first thought have been?

Fortunately, while still on the phone telling John we had to get the cute little guy, I realized that Charlie Chaplin also sported that same mustache, and so the puppy that we did in fact bring into our family, became Charlie.  Phew!  That was a close one.

To William Shakespeare I will say this.  What’s in a name?  Long term embarrassment if you’re not careful.

Loyalty demands that I include a picture of Cooper, my now elderly but still incredibly sweet dog, pictured with his big brother Jacob.  Cooper was, thankfully, named by his breeder. 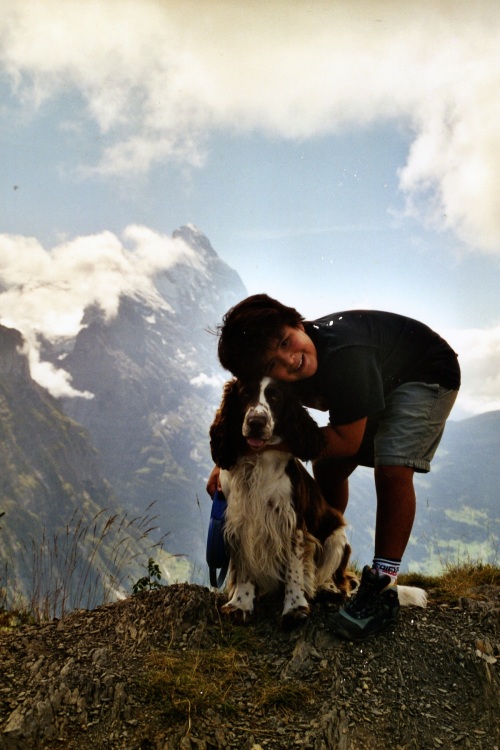