Breaking news that you may or may not see on the news.

The Democrats, led by Congressman John Lewis, are staging a sit in on the floor of the House of Representatives, demanding action on gun control legislation. 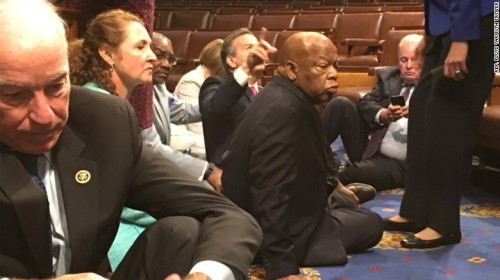 In case you don’t know who Congressman Lewis is, here’s how Wikipedia opens his biography:

This 76 year old man is sitting on the floor to force the House of Representatives to take some action.  There are chants of “No Bill, No Break” referring to the upcoming Congressional adjournment/recess, which is extra long this year allowing members to go to their party conventions.  Or, in the case of the GOP, not going to their party conventions.

The cameras that normally broadcast House action are off; they are controlled by House Speaker Paul Ryan who, naturally, won’t let it appear that either (1) he has lost control of what is happening on the floor of the House; or (2) that Democrats are trying to protect the lives of American citizens.

All I can say is:  We Shall Overcome.

Filed under 'Merica, 2016, 2nd Amendment, All The News You Need, All We Are Saying Is Give Peace A Chance, Beating that Dead Horse, Conspicuous consumption, Crazy Folks Running, Disgustology, Gun control, Health, House of Representatives, How the Hell Did We GET HERE?, John Lewis, Justice, Not something you hear about every day, Peaceful Protests, Politics, Satisfaction, Sit ins, Taking Care of Each Other, Washington, What must folks in other countries be thinking?