John and I agree on many, if not most, important things in life.

But we have very different feelings about squirrels.  He hates them and often tries to chase them off.  He runs out of the family room door, waving his arms to shoo them off.

I’m pretty sure our squirrels are baffled by John.  On the one hand, he puts out a delicious smorgasbord for them every single day.  On the other, he runs out, waving his arms in the air, as if warning them of an alien invasion.

Me, I find squirrels so entertaining and so clever, that, well, I just can’t begrudge them some bird seed.  Or most of the bird seed.  I realize that from time to time we have to replace the expensive squirrel-proof bird feeders that they cleverly open, empty and render completely useless.  Then there is the $4.2 billion we spend annually on birdseed instead of the $1.38 we would spend if we only had birds at our buffet.

Yes, a large number of squirrels enjoy E&J’s all-you-can-eat buffet.  If you’re a squirrel at our house, you’re “In with the ‘In-Crowd.'”

Anyway, about two months ago, John walked into the kitchen from the Dining Room where he has been throwing papers around since our dog Cooper got too old to go upstairs to John’s real office where he used to throw his paper.  And John saw a squirrel drinking out of our bird bath.

He started towards the door to do his arm-waving routine, when he stopped.  Because John saw that something else was going to chase the squirrel away!

Another animal came up onto our little deck, and headed towards the squirrel.  A fox!

The fox lunged at the unsuspecting squirrel, and they both disappeared into the hedge.  Only one of them was ever seen again. 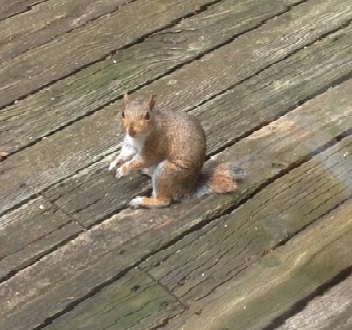 Photo Credit: ME!
(Yeah, it was an incredibly Lucky shot!)

Or maybe we should call him “Sorta Lucky.”