Would you behave yourself better if you knew that when you didn’t you’d be found out and there’d be no mistaking that it was you who perpetrated the “crime”?  That someone could actually finger you in the misdeed?  If the crime had your face all over it?

Just about 30 years ago when I was so very sick with colitis-that-was-really-Crohn’s, I was also very poor.  I had some big bills that had materialized as the result of the fact that I would buy stereo equipment and televisions when I got depressed.  Oh, and there were hospital and doctor bills.  And rent and food.  Maybe you’ve had your share?

It was the last day of the month, and I had to go across the street to the bank to check my bank balance to see if my rent check would clear.  On occasion it, ummmm, didn’t.  (It was my landlady’s fault though – the money was always in the bank when I wrote the check.  She should have cashed it right away, right?  You’re with me on that one, right?)

Anyway, when I got to the bank machine, it looked like this:

The previous customer, whom I didn’t see, had left their card behind.  Their pin number was still registered with the machine.  All I had to do was press “Yes” and I could have made another transaction.  Helped myself to some bonus bucks.

Now I am basically an honest person.  I have in my lifetime told a few lies – OK, so some were whoppers.  But I don’t do that anymore.

And when I was a kid I did steal a troll doll.  I still don’t know how I didn’t get caught – I stuck it under my shirt and was the only pregnant 8-year-old in the store.  I haven’t stolen a troll since.  I haven’t been pregnant either, but that’s a different story.

I will not, however, fess up to having maimed or murdered anyone, unless you count doing so with my razor-sharp wit.  Still, I am not perfect.

Anyway, when I saw that screen in the bank, when I actually knew that my rent check was likely to bounce, and I wasn’t sure how I was going to buy food, well, I was tempted.  I stood and stared at it for the longest time.  I felt my heart race.  I felt sweat on the back of my neck.  I heard that damn devil on my left shoulder talking to me. 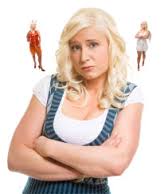 I reached towards the buttons and pressed:

And I walked into the bank and handed the person’s ATM card to the nearest teller.

Of course it was the right thing to do.  And, frankly, I was especially proud of myself because I really was broke.  I could have used a windfall at that moment.

It would have been great!

Of course, had I succumbed to temptation, I would have gotten an altogether different card.

The way my luck was goin’ anyway.

I don’t think stealing money is something that people (even me) should be able to get away with.  But there are many lesser crimes that, well, maybe aren’t so bad.  That maybe, we should let slide.  That perhaps, the faces of the perpetrators of these lesser crimes are ones we don’t really need to see.

One of the little crimes that drives me crazy is people who throw chewed chewing gum on the ground.  It’s unsanitary.  It’s sticky.  Worst of all, it’s gonna end up on my shoe.

I don’t want to know whose mouth that wad came from.  Because it would be hard to not slap them for being so gross.  And Mom taught me not to hit.

But now, thanks to modern DNA technology, we can now see the faces of the culprits who transformed that gum from a dry, powdery stick into a piece of ABC gum, spit it out and let me step on it.  (For those of you without siblings, that’s ‘Already Been Chewed’ gum.)

Yes, courtesy of the New York Times, I have this minty morsel to share with you:

While staring at the wall of her therapist’s office, the artist Heather Dewey-Hagborg noticed a strand of hair stuck in a hanging print. Walking home, she noticed that the subways and sidewalks were littered with genetic material on things like chewing gum and cigarette butts, some still moist with saliva. Curious about what she could learn, Ms. Dewey-Hagborg began to extract and sequence DNA from these discarded materials. Then — and here it gets a little eerie — she began to make computer models of their owners’ faces, using genetic clues to print 3-D masks that she concedes “might look more like a possible cousin than a spitting image.” Hanging these portraits along with the original samples, she says, is “a provocation designed to spur a cultural dialogue about genetic surveillance.”

Ewwww.  Click on the links, it gets ewwww-ier.  Here’s one perp:

Now this is just speculation on my part, but perhaps picking up wet ABC gum and cigarette butts is what Ms. Dewey-Hagborg should be talking to her therapist about.  Personally, I would make it a priority.

I was tempted to skip posting about this, but then I try not to give in to temptation.

These are all Google images. Except the last one.  That’s the artist’s rendition from her website, Stranger Visions.

83 responses to “A Sticky Wicket”