It was about 5-1/2 years ago when I first recommended canonization of my husband, John, to the Vatican.  Even though I am a very lapsed Catholic, I’m sure they’ll go along with it.  Because he really does deserve it.  Good spouses of many people with chronic diseases deserve special recognition, but I’m pretty sure only John deserves sainthood.  Because all the good saints have been tortured, haven’t they?  And John absolutely fits that bill. 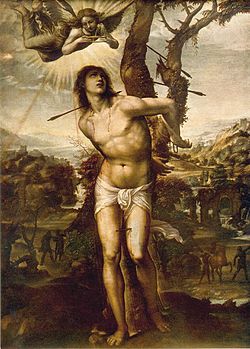 Saint Sebastian by Il Sodoma, c. 1525
(Image from Wikipedia)
I couldn’t find any saints who were suffocated, so John has a good shot

Let me mention that I’ve been reluctant to write about this subject.  But after multiple requests following my last post about good hygiene and the New Jersey Turnpike, I figured I’d just get it over with and get on with my life.

It’s a bad thing, being a Pooter-Pack.  Nobody likes them or wants them around.  And nobody wants to be called a pooter-pack.

In fact, in possibly the only instance where my brother was caught doing something wrong, Fred’s mouth was washed out with soap for calling our paperboy a “Pooter-Pack.”

It’s a pack of pooters, DUH!  You know – farts.  Butt burps.  Cutting the cheese.  “Fluff” as my childhood best friend Liz’s family called them for no logical reason.

I did not want to be a pooter-pack.  No-sirree Bob.  And for the longest time, I wasn’t.  Those were golden years that I did not fully appreciate.

To set the record straight, I did not become a pooter-pack that day when all the kids in my 6th grade English class thought I did.  I was viciously maligned.  Tagged.  Ridiculed.  It was a hot spring day and my young, innocent, bare leg stuck to my plastic seat.  When I moved, I made a nasty fart-like sound with my leg.

Let’s be clear about this:  I did not fart.  I would have died first.

But Tommy O, the main bully in my life, led Kevin E and John L in a sing-song around me:

I wanted to disappear.  Disolve.  Die.  It was so unfair.  I didn’t!  Not even so much as an SBD!    And it had no smell at all because I hadn’t farted.  It was a leg, umm, fart.  They’re different.  Somewhat pleasant, even.

I tried to defend myself, but the whole class heard the noise and believed the boys, not me.  I hate them all still.

Fast forward past many fart-free years.

In the early 1980s, I had a severe case of colitis-that-was-really-Crohn’s disease.  That was when I really started tooting my own horn.  Quietly, though, thankfully.  SBDs.

One of the treatments for many kinds of bowel disease is a drug called prednisone.  One of prednisone’s most notable symptoms is flatulence.  Prednisone does not give a girl delicate lady-like whiffs of something vaguely unpleasant that might induce a brief nose wrinkle.

Nope.  Waves of heavy, inescapable stink accompany a person taking prednisone.  Like Charlie Brown’s friend, Pig Pen, a smelly cloud hung around me wherever I went.

(Google image. Done by Charles Shultz, of course. Who, I am quite sure never had gas.)

In the Metro.  On a bus.  In an elevator.  In my office.  I was engulfed in my nasty, stinky cloud.

In spite of the evidence of everybody’s senses, I never admitted I had a problem.  That it was me polluting the air.  Nope.  I didn’t say a word to anyone.  I just couldn’t bear another bit of humiliation.  (But frankly, unless there were a whole lot of lucky people around me suffering from anosmia, loss of smell, people were polite or stupid.)

I’m going with polite.  Because my friends and co-workers were truly terrific.  And they knew just how embarrassing life was for me.  You see, when you have bowel disease, you are constantly in humiliating, compromising positions.  I’ve written about that many times, including here.

I didn’t mention that I’d become a pooter-pack to my parents, who were, luckily for them, safely in another state.  I couldn’t mention it to my sisters, including Beth, the nurse, who would have known the reason (I didn’t)  or Judy, who would have laughed herself silly and taken me along with her.

I also didn’t mention it to my roommate, Keily.  Keily lived with me.  She was exposed to the ill effects of the prednisone but never once broached the subject (she is the biggest-hearted person in the world, my friend Keily is).

I’m pretty sure that my dog, Goliath, loved me more because of the smell.  Dogs are gross.

The only person who ever mentioned flatulence to me was my gastroenterologist, Dr. C., the guy who gave me the damn fart pills.

“Are you having any gas?” he’d ask.  It was always the last in the usual lineup of embarrassing questions.

I would look him straight in the eye and say:

Dr. C would tilt his head like Goliath and look straight at me as we sat together in my stink cloud.  Every time he’d wait for my answer to change.

As far as my medical records from that time are concerned, I have never ummm, fluffed.  Dr. C surely wrote me up in a medical journal somewhere.  Or perhaps he went to a doctor to have his own sense of smell assessed.

Anyway, I had my surgery and for years I lived up to what I told Dr. C.  I did not pooter.  Truthfully this time.

I’m not sure that that was what first attracted John to me, but I’m sure the fact that I did not have a stink cloud around me didn’t hurt.  We’d been married about 20 years when my Crohn’s symptoms, ummm, re-erupted in about 2006.

I felt fine, actually.  But something peculiar happened whenever I would go to bed.  It started out slowly, gently, and then progressed to putrid:  Whenever I lay down, my bottom end erupted.  The most noxious substance passed out of my body and into the air in the bedroom.

It never happened if I was upright.  Ever.  Only John had to deal with it.

“There’s actually some comfort in it,” John said towards the beginning.   “Not every husband can be sure that their wife won’t lay with another man.”

I pursed my lips and glared at him.

Still, I couldn’t imagine what could possibly be happening.  But then I started to worry.  You see, when I had my surgery in 1982, which was for documented colitis, the doctors disagreed after the fact about what I had. If it came back within 10 years, it was Crohn’s; if it didn’t, it was colitis.  It turned out that it was Crohn’s that came back over 20 years later.  And it came back with a bang.

The first person I told my gaseous problem to was my late sister, Beth.  Beth was a nurse, and she was incredibly smart.  Amazing, in fact.  She could diagnose any malady in a nano-second.  So I told her about my problem, and that it was getting worse.

“Gee, Lease,” she said sympathetically, “It sounds like you could clear Walmart.”

“Try some GasX,” she recommended a bit more helpfully.

And I did.  GasX works.  It really does.  It even works on weird gas problems like mine.  Sort of.

At that time, GasX was available in two forms.  One that claimed it kept gas away for 4 hours, and the other said it kept it away for 6 hours.  Never was a drug label more accurately written.  Because exactly at 4 hours plus one second, all that stored up flatulence would burst out into my bedroom, like a neutron bomb.  In the middle of the night, and into the place where my poor husband tried to sleep with me.

He never complained.  Occasionally, he would moan “Oh, Lease,” but I’m sure that was just his way of searching for oxygen.

My boss, a physician, noticed me researching flatulence one day, and asked me why.  I confessed my problem to her.

She stood in my office and laughed until her belly hurt.

It’s never good when a doctor can’t stop laughing after you’ve described your symptoms.  Unfortunately, she couldn’t help me either, and she’s brilliant.  She’d never heard of reclining flatulence, either.  Nor had Google, my bible.

Unlike my previous time as a pooter-pack, this time there was no cloud of stink.  Instead, this time the stink formed a curtain, a wall around the bed.  It was truly horrible laying there in the poisonous air.  But I would, being the good wife I am, try to rid myself of the gas by going to the bathroom.

When I came back?  Getting back was like walking through a brick wall.  There was literally a physical wall of stinky bricks.

Which brings me to the reason my husband should be canonized.  Because for 2 years, and until the third of three different doctors poked and prodded and tested, did the third one figure out what was wrong with me (an internal abscess that required surgery), my husband did not complain that I was not exactly a dream wife.

And never once did he call me a pooter-pack.

In a last-ditch effort to save a little bit of my nearly exhausted pride, I will tell you that since that surgery, I have not been a pooter-pack.  Honest.  Would I lie?