When I Became Famous. Sort of

So old, that I forgot to mention that I once broke a Guinness World Record.

Now, I will admit that it wasn’t really a big deal for me.  I had already achieved my 15 minutes of fame by that time, and it had happened just a few days before breaking the record.

Oh, have I gotten ahead of myself again?  Sorry.  Fame does that to a person.  At least it does it to me.

It was our last year in Europe.  One of the reasons I had wanted to move to Europe was because I wanted to see Europe.  John had spent his junior year of college abroad, in Edinburgh, and fell in love with the place.  So whenever we crossed the Atlantic, Scotland was somehow where we landed every damn time.  During our 5 years living in Europe, we still found our way to Scotland.  Strangely, it became very much like going home to me.   I mean, they speak English there.  Sort of.

Edinburgh has the biggest New Year’s Eve celebration in all of Europe – Hogmanay.  It is a week-long party, complete with medieval revelry and modern touches — Jacob especially loved the carnival rides set up along some of the main streets.  And the fire.

As all things in a good European city with a castle in the middle, the real kickoff starts at the Castle. 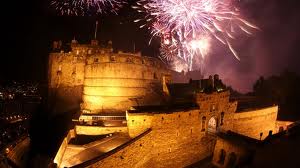 The Scots build a replica Viking ship like the ones that raided their shores for centuries.  They haul it from the Castle down through the medieval street called The Royal Mile which leads downhill to Holyrood Palace and then across town and up again, to Calton Hill, another high spot in the city with magical views of Edinburgh Castle, Holyrood Palace, and the land formations known as Arthur’s Seat and the Salisbury Craigs  (where John asked me to marry him).  The crowd gathers around the Viking Ship while looking over the majestic city.  Seriously cool stuff — you can smell the history.

Oh, did I mention that they set the bloomin’ Viking Ship on fire first?  And pull it through the streets?

Or that literally everybody is carrying a bloomin’ flaming torch ­­– regardless of their age or state of inebriation? 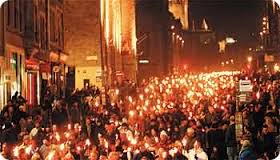 It is brilliantly fun in a “this will be a memorable way to die” sort of way.

Jacob was 10 and thoroughly into it.  The flames, the burning ship, the old buildings, the bagpipes.  He was in a 10-year-old’s version of heaven.  Which meant that I was expecting one or all of us to die at any given moment.

When we reached the end of the parade and a film crew from the travel bureau was interviewing volunteers.  Looking for revelers to tell the folks at home what they loved about Hogmanay in Edinburgh, Jacob jumped right up.

Unfortunately, the laws required that a parent  go on film with him, though, because Jacob was under age.  The parent wouldn’t have to participate, but it was necessary that John or I stand next to our son.  On camera.  John, true to form, backed away and tried to hide.  It was the last thing that I wanted to do.  But it was for my son.  And I knew I’d be able to use my participation against my husband for decades.

Did I mention that I don’t like being filmed?  It’s true.  You see, cameras always bring out my psychotic side.  No matter what I am doing when they start filming me, I look like Jack Nicholson in The Shining.  Or Lizzie Borden on her way to buy the axe.  Or Carrie, when she discovers how to get back at all the people who were ever mean to her.  I look rather frightening.

How could I say no?  He was so excited!  So I took a deep breath and asked my husband if I looked OK.  It was a cold night;  we were layered up, Michelin Man-like, only not so photogenic.  Heavy down coats, and so many layers that my arms rested at 45 degree angles from my body.  Not exactly the way a girl who once dreamed of Hollywood wants to look for her first time on TV.

“You look fine,” he assured me.  “Warm,” he said, choking back his laugh.  The light of the thousand deadly torches shown in his damn dancing eyes.  It would have been so easy to just push him off the edge of the cliff he was backing towards.

Jacob and I turned back to the film crew.  They positioned us, turned the klieg lights on, pointed them at us, held a microphone up to Jacob and said in a lovely Scottish lilt:

“What brings you to Hogmanay in Edinburgh?”

Jacob stood frozen in fear.  I tried to urge him on, silently, as the camera was rolling.  He just looked at me with his big, terrified eyes that positively screamed ‘Help me Mom!’

The reporter and camera crew were busy, however.  Three strikes, therefore, and he was out.  They turned the microphone – and the camera – towards me. Shit!  What could I do but answer their questions?

I had to explain that we were Americans, living in Geneva, and we’d come to enjoy the biggest party in Europe.  That we had all fallen in love with Edinburgh, and had returned many times.  This time, however was our first Hogmanay.

“What are you enjoying most?”

“My son, Jacob, loved the torch-light parade.  We couldn’t believe that they lit a replica of a Viking ship and paraded it through the ancient streets.  It was so cool, wasn’t it Jacob?”

They asked him another question, and he froze again.  Poor kid.  Fame is hard work.

So they turned back to me.

“What would you say to the folks back home in America if they were considering traveling to Scotland?”

“I’d tell them that it’s a lovely country.  The cities are beautiful and filled with history.  The countryside is stunning.  And they speak English here.  Sort of.”

The reporter interviewing turned wide-eyed to her cameraman:

“Did you get that last bit?”

I was a star.  They were pleased.  But then they hadn’t seen the film yet.  As far as I know, it was never used.  Except perhaps in training reporters for signs of potential freezing and psycosis.

Still, there was anther, more lasting way for us to achieve fame during that trip.   We broke a Guinness World Record!

It was two days after my film debut – on New Year’s Eve proper.

Earlier in the day, we heard that the Hogmanay folks were planning on breaking one of the Guinness World Record.  Jacob was excited, and wanted to figure out how so he could watch.  But it turned out even better.  We not only watched, we helped break that Record!

Several city blocks were cordoned off — a block away and parallel to Princes’ Street, if you know the city.  A stage sat up at one end of the street with a Ceilidh band — a traditional Scottish folk band that played traditional Scottish folk reels.  A swarm of volunteers with clipboards snaked through the crowd taking names of folks who wanted to participate in the effort to break the world record for the Longest ‘Strip the Willow’ – a Scottish Highland reel – in the World.  The Guinness folks were on hand to verify if, in fact, the record was broken.

John, Jacob and I, not having the slighted idea of how to strip a willow, or even if it was a proper thing to do with a 10-year-old boy, joined in.  Yes!  Even John danced!

Edinburgh’s Hogmanay: “Longest Strip the Willow in the World”

We did it!  We broke the record!  And I must say it was total pandemonium.  Because virtually everybody in the world, it seemed, joined in.  Once it got going everybody was dancing.  Many folks like us didn’t really know how to strip a willow.  That made for a whole lot of people bashing into a whole lot of other people.  Fortunately, alcohol eased the pain.  Mostly we grabbed arms and swung our partners in time to the beat of the Ceilidh band.

We had a blast.  The Scots are the most wonderful people.  Friendly, crazy.  Willing to show us how to do the dances.  Willing to let us bash into them with abandon as we enjoyed reeling with the lot of them.  And that was, possibly the most challenging bit of it.  Because normally when I dance, I don’t wear a winter coat.  Or long johns.  Or a 25 lb backpack on my back.  I’m less graceful when I do.

There was really nothing to be done with my backpack other then wear it on my back and hit unsuspecting dancers with it whenever I spun.  Which is exactly what you do when you Strip the Willow.  You see, the backpack contained my wallet, John’s wallet, passports, keys.  Necessaries for the day out away from our hotel.  Everything that we couldn’t do without which was why I had it all there to begin with.

So if you look at that film, which may or may not be from the year when we were actually there (they break the record every year, a technicality we did not know at the time), look for a Michelin Man with curly reddish-blond hair bashing into every single person within a 2-block radius.  That’ll be me.

If only I’d thought to have the Guinness folks on the lookout for the most dance-induced bruises, my name would actually be in the book!  As it was, the event made it into the 2003 Guinness Book of World Records, but not the names of the thousands of participants.

Sigh.  Fame is so fleeting.

If you ever want to go somewhere special for New Years Eve, I highly recommend Edinburgh.  It is a wonderful, joyous, fun party.  The Scots are wonderful people and will welcome you to their city, which is magical.  You can feel history in each step you take in Edinburgh, and it is magical.

Besides, in Scotland they speak English.  Sort of.

This post was inspired by Art who, ably assisted by Trent and X is valiantly trying to break a blogging record for the most comments ever on a blog.  Go on over and abuse him if you haven’t already.  Because breaking records is fun.  For no real reason, but it’s just fun.  Just leave your backpack behind if you’re dancing anywhere near me.