The Heart of the Matter

How did you like living in the U.S. under the Articles of Confederation and Perpetual Union? 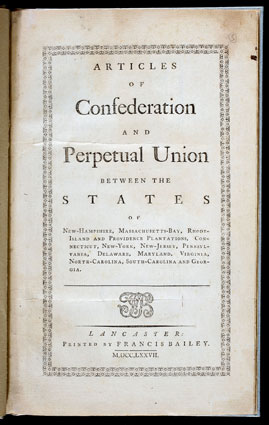 For those of you who aren’t in the U.S., the Articles of Confederation and Perpetual Union was the system of government the baby United States adopted right after the Revolutionary War.  It basically granted all power to the individual 13 states; anything that crossed state borders was subject to negotiation.  Everything.

The Articles of Confederation worked so well last time that they lasted, well, from 1777 all the way until 1791.  Wow, that’s a lifetime.  If you’re a dog, that is.  Then in 1791 the U.S. Constitution was adopted because states rights are, umm, unworkable with 13 states (with 50 I’m sure it’d be much more workable).

Why didn’t it work?  Well, the “Federal Government” existed under the Articles, but it was powerless.  Primarily because it couldn’t levy or collect taxes.  Imagine the Federal Government in the role of Cinderella, and you’ve got the general idea.  Yup, the rich and powerful states like Virginia and NY were perfectly willing to screw the smaller, poorer states (pity my poor little Connecticut with no fairy godmother!)

Now, back to my question.  How did you like living in the U.S. under the Articles of Confederation?

Oh you didn’t?  Well, tough noogies, because you may just get to live under them again.  Wouldn’t that be a hoot?

You see, “States Rights” is a huge part of what the modern GOP is all about.  (And yes, I used the term “modern” ironically.)  They want all the power to go to the states from the Federal Government.

That’s what Mitt Romney wants to do with Medicaid – send block grants to the states!  Wooh Hoo!

That’s what Mitt Romney wants to do with Healthcare – make the states figure it out.  Yippee!!

That’s what Mitt Romney wants to do with FEMA – the Federal Emergency Management Administration.  Won’t that knock your socks off?  Or your roof?

Now, I need to digress for a minute.

Can someone please explain to me why Mitt Romney

is running for head of the

if he wants all the power to go to the states?

I mean, can’t he run for governor in one of the other states where he has one of his many homes?  Not one that I or any of my friends or family live in, mind you.

The GOP has way too many stupid ideas.  That’s not part of my digression.  Or I have been digressing that way for 32 years (since Reagan).  One of the two.

So yeah, Mitt wants the Federal Government out of FEMA.  He’d kind of like it to go back to the states (see Articles of Confederation, above).  But what he’d really like is to send it back to the Holy Private Sector. Because insurance companies are so cooperative during natural disasters, aren’t they?

[Yup, that’s what Mitt Romney said back when he was Severely Conservative Mitt.  He wanted all the power to go back to the states.  And he confirmed that that’s what he’d do if he becomes president on Sunday night, 10/28/12.]

I wonder how that’ll play in North Carolina and Virginia — battleground states — next week.  Probably no better than in any other area that’s been hit by this or any other natural disaster.

You know, I’m beginning to think that Dick Cheney had the right idea.  Maybe we should move all the GOP members up to the head of the line for heart transplants.  We can start with Mitt Romney and Paul Ryan.  They certainly seem more in need of hearts; the Democrats clearly already have them in spades.

44 responses to “The Heart of the Matter”