Why I Don’t Pray

As soon as John and Jacob saw me, they knew something was up. Something weird. Because I hadn’t looked nearly so cheerful the last time they’d seen me.

I had to admit, they were right.

Even though on that particular day, I had planned to be thoughtful. Sad. Mournful. I planned to wallow just a tad. It was, after all, the first anniversary of my mother’s death. I was a long way away from my heartbroken Dad; I wouldn’t be able to call and let him know that I was thinking of her. I felt, well, I felt I deserved it, because sometimes, no matter where you were, you just have to give into the loss.

That had been my plan, anyway. That’s not exactly what happened.

Did you see the movie The Monuments Men? It was pretty much panned by the critics, but I really liked it. It was about a group of academics who went to war to save great art from Hitler. It had compelling action, great works of art, and the struggle against good and evil. Equally important, it had no robots in it. Or baseball.

Naturally, since that trailer rudely left out the most important part of the movie – the one that I was involved in, I’m going to actually have to write this story up.

Oh, and Lord Grantham is also looking for the particular sculpture commemorated in this post. That’s actually where my story comes in.  Well sort of.

Anyway, John, Jacob and I were In Bruges (another really great movie, actually). Bruges is a lovely old city, that seems like it is stopped in time, which is kind of because it WAS actually stopped in time.

A busy, beautiful port city that, according to Wikipedia, was:

At one time, it was considered the “chief commercial city” of the world.[6] “Rise, fall and resurrection make up the life story of Bruges, a city that glittered in Northern Europe with as much panache as Venice did in the Mediterranean World.”[7]

Only the harbor silted up, and its use as a port was history. Today?  Today, it’s a damn pretty place.

We’d been traveling for a few days, had had our own Waterloo; we’d been to Amsterdam, where we visited Ann Frank’s attic, where Jacob drove a boat filled with tourists through crowded canals, and where John and I accidentally introduced our 8 year old to the Red Light District. So we were ready to just relax and wander when we got to Bruges.

The centerpiece of the town is the Church of Our Lady, Bruges, a beautiful cathedral built between the 13th and 15th Century. It is found in the heart of the town square. 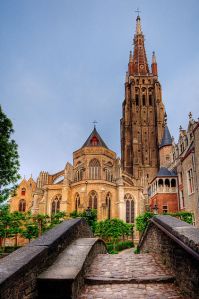 Wikipedia Image (you thought I was gonna say “Google,” admit it.)

It’s a lovely church, but its altarpiece alone makes it worth the trip.  It is world famous, a luminous, transcendent sculpture that one feels as well as sees.  It has an illustrious history of its own, Michelangelo’s Madonna and Child. The sculpture was the only one of his sculptures to leave Italy during the artist’s lifetime.  More currently, and relevant to the movie theme in this post, it was one of the pieces of art most sought after by the Third Reich. The Monument Men were tasked with preventing the Nazis from getting it (or destroying it) as they retreated at the end of the war. 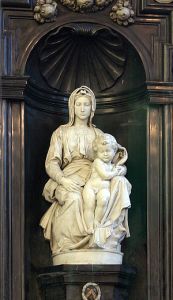 I’m not going to tell you what happens, but I will say, that the Monument Men didn’t have an easy job of it.  Of course, I could have told them that they were wasting their effort. Because as I found out, Michelangelo’s Madonna and Child was well guarded. Even when nobody was really after it.

Well, I started the visit to the Church with John and Jacob, where we taught our young son the history of the church, looked and discussed the art work throughout the church. We went to the gift shop, where I bought a flier about the Cathedral for my Dad, and a remembrance for Jacob. We’re good parents.  We knew the routine. After a while, John and Jacob left to climb the tower overlooking the other side of the square. They left me to meditate, to think about my mother, to grieve. It was very considerate of them. Sadly, my reflection was short-lived.

The Church was nearly empty, and the late morning light shone through the stained glass, coloring the floor in front of the Madonna. I could hear the breathing of the few people looking at the paintings, there was an elderly couple doing the Stations of the Cross. But mostly I was alone with my Mom. And with another mother and baby, right there on the altar in front of me.

There are some pieces of art that reach out and touch you. That fill your heart. That start your healing as you gaze. Michelangelo’s Madonna and Child is one of those.

In the back of the church, coming from near the gift shop, I heard an announcement, softly broadcast over the intercom system. A few minutes later, I heard it again. It was in Dutch. Or Flemmish. Or Bruge-ian. I didn’t understand it. Ok, so I ignored it. What could be so important?

I continued my contemplation. I began to think of my Mom, to weep quietly, tastefully. Hardly at all noticeably, when somebody roughly grabbed my arm and shook it.

“#*&%+##@@*!” said a very tall, very grave Nun. I was pretty sure she had a ruler in her pocket. All the stories my siblings had told me about the nuns they had known – all of whom believed firmly in beating children, flooded into my mind.

“Excuse me, M’am. I don’t understand you,” I said to her in English.

“EEENglesh!” she said, as if that explained everything. “YOU MUST LEAF.  NOW!!!”

“LEAF?” I responded, confused. Why did I have to LEAF? I was in a church. In mourning. I WAS PRAYING FOR CHRIST’S SAKE! “I am here for my mother, she died,” I said, and I started to cry.

“OUT!” she shouted, pulling me.

Google this time. You got me.

This was NOT Sister Bertrille.

She grabbed me by my sleeve, pulled me from the pew, walked me to the door, and firmly shoved me outside.

Now, I have been caught doing many untoward things.  But this time?  This time I was thrown out of a church. WHILE I WAS PRAYING.  Isn’t there some eclesiastical law against that?  Call the Pope.

So, when I saw The Monuments Men, well, I wish I’d been around during that day. They didn’t have to work so very hard, give up so much to protect Michelangelo’s Madonna and Child. All they needed was one nun in need of a sandwich.

This post was brought to you courtesy of Frank at AFrankAngle.  He suggested I write it up the story of how I was thrown out of a church, so I did.  Note to self:  Remember to thank folks who inspire and who also actually read your blog.