This weekend when we got our Christmas tree, I became a poor imitation of my father.  It happens every year.  I don’t bargain the way Dad did.  I don’t cajole.  I don’t convince.

Nope.  I pay through the nose.

Still, I always feel him standing with me, laughing, telling his favorite Christmas story one more time.

You see, unlike me, Dad never paid too much, or even very much, for our Christmas tree.  Never.

Dad had a wife and five children, not to mention the other relatives who were still around for Christmas.  Dad also worked three jobs when I was really little, while studying to get his insurance license so he could start his own business (he did).

There wasn’t a lot of spare cash to go around.  But a wife and five kids needed a Christmas tree to celebrate properly.  And Dad, well, Dad was actually a total sucker for Christmas.  He tried to hide it, but Christmas was always special to him.

We lived in the city of Bridgeport, Connecticut, when I was very young.  It seemed like each corner sported a guy selling cut Christmas trees that had been brought in from more rural areas.  Mostly, the guy selling them was the same guy who cut them and who owned the land they grew on.  Dad had been seeing these same men every year for a decade.

As kids, we all knew that when they started appearing in the neighborhood, it meant that Christmas really was coming.

But whenever these guys would see Dad, they would purse their lips, remembering last year.  And the year before.  They didn’t remember Dad in a fond way.  Still, Dad would greet each one of them with his incredible smile.  His eyes would dance.

“Fine Fred,” Charlie (or Joe, or Mac) would respond, as Dad would visit each of them.  They’d chat for a minute and then Charlie would go into his sales pitch:   “Got some nice trees here, this year.  Wouldn’t that pretty daughter of yours like this big one?  It would be hard to find an angel to put on top prettier than you are,” Charlie would say.

The pretty daughter Charlie (or Joe, or Mac) was talking about was Beth, my eldest sister. Beth was beautiful.  Black Irish — dark wavy hair and startling gray/blue eyes.

Beth’d cringe inside and give Charlie or Joe or Mac what looked like a shy half-smile but that was, in fact, a grimace.  She would rather have been anywhere else.  She knew the routine though, and she played her part every year.  Beth was the pretty daughter with the big blue eyes who never spoke; all the Christmas tree salesmen remembered her.

“I wanted to die,” Beth would laugh, recalling her childhood trauma.  “Vanish.  Dig that hole to the other side of the planet and crawl down to China.  Every year he’d take me with him.  I always tried to get out of it.”  In fact, it became a series of fond memories for Beth.  One of the times it was Beth and Dad against the world, or at least against Charlie and Joe and Mac.

They’d walk past the tree sellers for a couple of weeks, looking at the trees, with Beth picking out a beauty and looking hopefully towards Dad.

Beth would accept disappointment gracefully, and they would continue on their way.

On Christmas Eve in the middle of the afternoon, Dad would place his wallet on the table next to the door, take Beth by the hand and say,

“We’re going to get our tree now.”

“It’s about time,” Mom laugh.  “Don’t let your Dad spend too much on it,” she’d say to Beth with a knowing wink.  They all knew what was going to happen.  Dad would just laugh as he and Beth would head to the nearest Christmas tree stand.  Charlie’s.

“Merry Christmas, Charlie,” Dad would say with a smile, reaching out to shake Charlie’s hand.  “Christmas just snuck up on me.  How did it get to be Christmas Eve so fast?”

Charlie would frown and shake his head.  He knew what was coming.

“I think that Beth and I would like to buy a Christmas tree,” Dad would say as if the thought had just occurred to him.  “Which one should we get?”

Beth would look over the trees and pick out the biggest, nicest one.

“I’ve only got two dollars,” Dad would say.

Dad would look at his watch.  “It’s 3:30 on Christmas Eve.  I’ve got $2.”  Then he’d look south down the street towards Joe’s Christmas tree stand.

Charlie would look at Dad, trying to stare him down.  Dad would look right back, with a mischievous look in his eye.  He’d hold up two single dollar bills.  He’d rub the two together next to his ear.  He’d rub them next to Beth’s ear.

After that, it was a staring contest.  Beth remained silent, in her role as pitiful prop.  Beth was dying of embarrassment and at the same time fascinated by the sport.

Charlie always took the two bucks, knowing that in a few more hours, that tree would be worth nothing.

“Merry Christmas, Charlie!” Dad would say as he and Beth walked away with the best tree.  “See ya next year.” 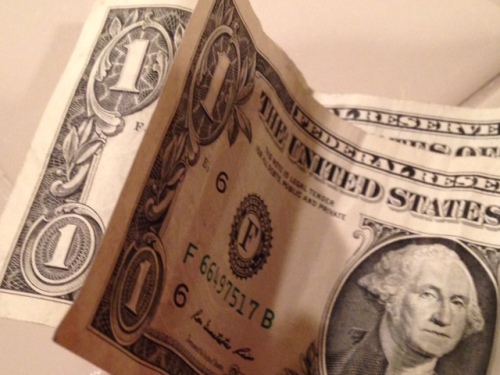