Some days I am overwhelmed with awe at how brilliant people can be.  I read about new discoveries and new science every day.  And it is amazing.

And then there are days like today, when I am astonished at how willfully and intentionally ignorant some folks can be.  And I realize that the lengths to which some folks will go to remain and reaffirm their ignorance is merely the tip of the iceberg.  The icing on the cake.  The snow on the mountaintop.

Yesterday, while driving on the New Jersey Turnpike, I saw this billboard: 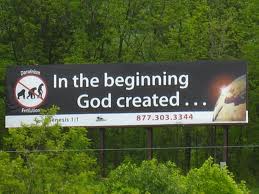 It doesn’t mention what happens in the end, though.

And I have to honestly say, I don’t get it a whole lot of things about this billboard.

First, I don’t get why folks are bound and determined that I am going to think just like them.  And that they will keep hitting me over the head with their crap until I agree.

Second, do they really think that someone is going to be driving along the New Jersey Turnpike and need religion?  (Well, sometimes it does seem like hell, but still.)

Do they think that, while sitting in gridlock, paying exorbitant tolls or avoiding stupid drivers, people will suddenly “see the light” and say to their spouse:

“Honey, I understand it now.  God created the universe in seven days.  Period.  Seven twenty-four-hour days.  And science had nothing to do with it.  But you know, Dear, what I can’t seem to figure out is why God let us think up all this science stuff to begin with.”

My mother used to say “you catch more flies with honey.”  And it’s true.  Especially with people’s deeply held beliefs.  Christianity became such a dominant religion by incorporating much of the beliefs and traditions of the pagans.  Not by saying “nannie, nannie, boo-boo, I’m right you’re wrong.”

Even seeing stuff like this billboard and a thousand roadside signs I passed, well, sometimes I can still be surprised by the lengths to which folks will go to try and tell me, to prove to me, that my beliefs are wrong.  But today I read an article that has me still shaking my head, hours after seeing it.

Nessie, in the famous “Surgeon’s Photograph” from 1934 that is widely believed to be a hoax. (Thanks, Google.)

THOUSANDS of American school pupils are to be taught that the Loch Ness monster is real – in an attempt by religious teachers to disprove Charles Darwin’s theory of evolution.

Pupils attending privately-run Christian schools in the southern state of Louisiana will learn from textbooks next year, which claim Scotland’s most famous mythological beast is a living creature.

Thousands of children are to receive publicly-funded vouchers enabling them to attend the schools – which follow a strict fundamentalist curriculum.

Me, I don’t understand why evolution and creation cannot co-exist.

The existence of God and belief in a higher power does not mean that the universe was created in a week and man in a day.  Man and woman, however we were created, have minds and a curious nature.  That’s what makes us unique.  That is also how we discover cool things, like how to photograph pretend monsters.

But public money is going to pay to teach religion.  I will repeat.  Public money.  Whatever happened to the separation of Church and State?  The founding fathers will have something to say about this at the Reckoning, I’d bet.

As a nation, and as living, rational human beings we are walking a tightrope.  Backwards.

Inherit the Wind should be required viewing.