“Two” is my second favorite number.  Although I am the fifth child, I was raised with two older brothers and two older sisters.  None of them ever beat me up, so two is a pretty good number of each to have, if you ask me.

My love of twos continued.  In my second year of high school, I had my second audition ever, with my friend Sue and I singing “Tea For Two” while doing a cute, simple little two-step.  Sue taught me enough dance steps so that our duet was respectable.  Actually, I’m thinking that it must have been twice as good as anyone else’s, because Sue ended up playing the lead in our high school’s production of Guys and Dolls.  Me?  Well, let’s just say that I was only forced to forgo an important role in the play because of my grades.  Otherwise, I would have been great.  Twice as good as everybody else, in fact.

So why all the two’s today?  And if two is so damn important, shouldn’t I have written this up on Tuesday?

Nope.  It had to be today.  Because today is a two-fer fer me.

First, But Mostly Hers became my 200th follower.  Appropriately, BMH has two names, the other one being her blog address which is:  http://mysending.wordpress.com/.  Thanks BMH!  And thanks to the 199 that I will not name (you’re welcome) — but to whom I want to say two things: 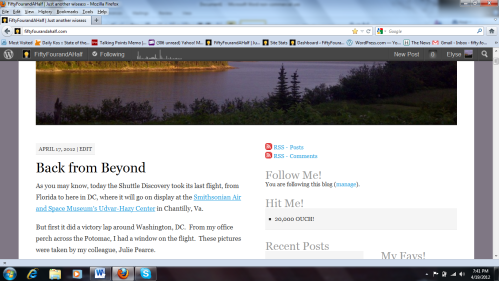 So I just wanted to say thanks to you guys, my virtual friends.  I have been blogging for nearly a year now, and I have made a whole bunch of new friends.  I’ve learned a lot from all of you, I’ve peered into your souls and let you into mine.

Learning and laughing.  The two reasons I blog.

Thanks everybody.  I’ll stop writing now.  It’s too late to say anything more!