I’m a white woman of Irish descent, and so I am pretty sure that I can explain exactly why President Obama, and really, all African-American men and women, would do just about anything to return to the way life was before the Civil War.  Life was so much better way back then, don’t cha think?  Especially for people of color. 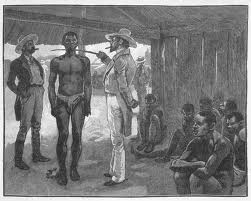 You gotta love Sarah Palin.  You gotta pay attention to the former candidate for Vice President of the United States.  Well, you gotta do something with her.  Slapping would work for me.

You see, she couldn’t keep quiet knowing that the new movie GAME CHANGE might just imply that she was, well, not the brightest star in the GOP firmament.  She couldn’t rest thinking that some people who once thought that she really did have a brain might see this movie and change their minds.  Instead, she made sure that nobody will mistake her for someone who should be allowed out without a muzzle.

I’ve got to say, though, she is so dog-gone creative in her criticism of the President.  You betcha!

[Sorry – this is an Obama fundraising ad – I’m not pushing you to give.  But the full video, surprise, surprise, seems to have been taken off of Fox News.]

Now, Poor Sarah has contended that this video was edited to quote her out of context.  So, here, you be the judge.  The stuff between the italics is what was edited out.

He is bringing us back to days, you can hearken back to days before the Civil War, [when unfortunately too many Americans mistakenly believed that not all men were created equal. And it was the Civil War that began the codification of the truth that here in America, yes we are equal, and we all have equal opportunities, not based on the color of your skin, you have equal opportunity to work hard and to succeed and to embrace God-given opportunities to develop resources and work extremely hard and as I say, to succeed. Now, it has taken all these years for many Americans to understand the gravity of that mistake that took place before the Civil War and why the Civil War had to really start changing America.] What Barack Obama seems to want to do is go back to before those days when we were in different classes based on income, based on color of skin. Why are we allowing our country to move backwards? [instead of moving forward with that understanding that as our charters of liberty spell out for us, we are all created equally?]

For my international readers, pre-Civil War America was not a nice place for blacks.  Trust me on that one.

But you know, only Sarah Palin would say out loud, and in front of a television camera, that a black man would want to go back to the days of slavery, of being sold away from your family, of being whipped to death for the smallest reason, or for no reason at all.  Only Freedom lovin’ Sarah Palin could even think that.  Yup, those were the days.  Who wouldn’t want to go back?   Those dresses were amazing. And the lifestyle?  Well, it was to die for”  You betcha, especially if you were a slave.

Apparently, it was very hot that day.

In fact, I bet Barack is irritated as hell that there is no “Way Back Machine.”  Because, although Sarah didn’t say it, I bet President Obama might also like to go back in time to the fifties, where being the biracial son of a white woman and a black man was the height of cool.  I bet he’d love those fire hoses — so refreshing on a hot summer’s eve.

And the dogs that sometimes greeted blacks like this one in Birmingham.

Hey, the President is a dog lover — maybe he could bring Bo with him!

Look! They already know how to play!

Perhaps we can even throw in a visit to South Africa, say, sometime between 1948 and 1994, you know, during Apartheid!  He could hang with Nelson Mandela on Robben Island!  Who hooo – wouldn’t that be a time. 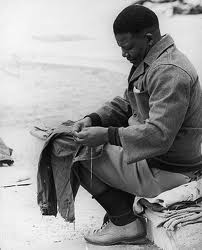 Nelson Mandela in prison on Robben Island in 1966

Me, I’d like to use the Way Back Machine to find a time when I’d never heard of Sarah Palin.

There is really nothing funny about Sarah Palin.  She is evil and dangerous.  Oh, and stupid.

All photos via Google Images

69 responses to “Take Me Back”