WTF DO They Want?

Multi-tasking, as usual, I nearly choked this morning as I placed my breakfast on a small plate.   You see, the plate had the New Yorker Cartoon shown above; I had one eye on my breakfast and one eye on the news on my iPad. [For the record, reading the news while eating will get more and more dangerous as November 2016 approaches.]

What did I see that caused me to choke without taking a bite?  This headline:

Apparently, 2016 GOP hopeful for the “big tamale” Senator Marco Rubio voted in favor of a bill that was designed just for women!  Things got even better for women when then-Governor (and 2016 GOP hopeful for his turn in the family mansion) Jeb Bush signed that special bill into law.  You know, to keep things nice for nice women.  To treat special women, well, differently. Or to make certain women feel special.  Or at least to get them noticed.

It was a bill that required unwed pregnant women wishing to put their babies up for adoption to post their recent sexual histories in the newspaper before they could place their baby for adoption.  The ostensible reason is to find the fathers and make sure their rights are secured.  There was no exception to this law for rape or incest.

Think about that for a moment.  With the GOP, it’s “Damned if you do, Damned if you Don’t,”  ain’t it.  At least when it comes to sex, anyway.  I mean for women.

These folks, these MEN are opposed to virtually everything that has to do with sex, sexuality and the possible outcomes of that instinct in all of us to procreate.  They oppose

In fact, I’m pretty sure that unless it involve GOP control of an embryo, it’s verboten.

But this one took me by surprise.  Because now they oppose Adoption as a solution to unwanted pregnancy too? What the hell is left besides infanticide?  Do they promote infanticide?

They believe that regulation is bad, evil. Unless, of course, it involves a woman’s vagina and/or uterus.

What is wrong with these men?  Maybe they just have don’t know how to act towards women.  Because, you know, they’re rather old fashioned. Their fashions, in fact, go all the way back to the Dark Ages.

This is what you get for burnin’ them bras in the ’60s. (Google image)

And it’s such good news for the GOP that Rubio voted for this bill.  Because the article notes that Rubio’s support for the bill will give Jeb Bush “cover” for having signed it into law.  It’s all hunky dory!  I guess all the guys were doing it, so it’s OK. Just the way all the frat boys do it. Ammirite?

mi·sog·y·nist
məˈsäjənəst/
noun
noun: misogynist; plural noun: misogynists
1. a person who dislikes, despises, or is strongly prejudiced against women.
woman-hater; More
Synonyms:  antifeminist, (Male) chauvinist, sexist, hater;
informal: male chauvinist pig
“he apparently deserved his reputation as a misogynist.”
adjective: misogynist
1. relating to or characteristic of a misogynist
“a misogynist attitude”
It would be nice if this sort of thing were ancient history.  But it’s not.  While Jebby stated in his 1995 book, Profiles in Character (Subtitle,no doubt is “Don’t Make Me Barf,”) he restated it again more recently.  Yup. Jeb Bush said that he believes that unwed mothers should be publicly shamed, and doing so would lower the number of unwanted (e.g. unmarried) pregnancies!  What a hoot!  Imagine the fun.  Yup, let’s bring the stocks back out into the public square. 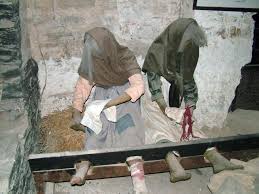 Now you know, I think Jeb is on to something.  Maybe he’s in the right church, wrong pew.  Maybe public shaming IS necessary.
Let’s be sure, though, that we shame the proper people.  Let’s start with Jeb.  And his big bro.  Then we can warm up to the other folks that either lied us into war or damaged our economy, perhaps irreparably.  Let’s shame them publicly, for their lies.  For their acrimony.  For their partisanship.  For their totally misplaced moral outrage.
And let the first stone be thrown by the first woman who had to publish her sexual history in the Florida newspapers because of two men Marco Rubio and Jeb Bush.  Two men who, with any luck at all, will never be president.
***
The law was repealed after about two years following a lawsuit.  Poor Jeb had to repeal the law. Obviously, he acted against his convictions.  Which of course makes him two-faced in addition to being misogynistic.  What a guy.  I’d love to have him for my leader.
<*Swoons*>