She told the story every year with a warm smile on her face.  Sometimes her eyes got a little bit misty.

“It was 1943, and the War was on, and your father was in the Navy, on a ship somewhere in the Pacific.  We never knew where he was.  Like all the other boys I knew, he was in danger every day.  We lived for the mail, we were terrified of unfamiliar visitors in uniform.  A telegram sent us into a panic.  And ‘I’ll be Home for Christmas’ had just been recorded by Bing Crosby.  It was Number One on the Hit Parade.”

That’s how Mom started the story every time.

Of course I’ll Be Home For Christmas was Number One that year.  Everyone, or just about, was hoping that someone they loved would, in fact, be home for Christmas.  That all the boys would be home for good.  But all too many people were disappointed.  I doubt there were many dry eyes when that song came on the radio that year or for the next few.

Mom and Dad got engaged right around Pearl Harbor Day, but the War lengthened their courtship significantly because Dad enlisted shortly after the attack.  It was to be a long war, and a long engagement.  But Mom was in love with her handsome man.  Dad was even more so. 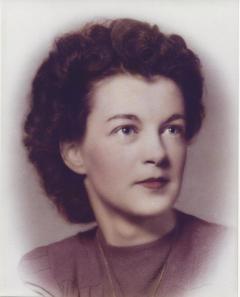 My Dad was drop-dead gorgeous, and I’ve heard that in his single days, he was a bit of a ladies’ man.  Every girl in town, it seemed, had a crush on him. 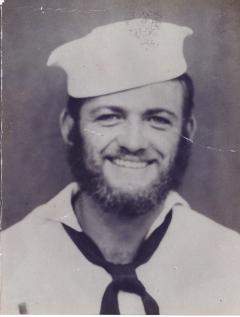 In fact, my Aunt Sally once told me that she had been manning a booth at a church bizarre one Saturday in about 1995, when an elderly woman came up to talk to her.

“Are you Freddie E’s sister?” the woman asked Aunt Sal.

“Yes I am.  Do you know my brother?” Aunt Sal responded.

“I hope you told her I still am!” Dad quipped when he heard the story.

One day not long after Mom had passed, Dad and I were looking at some pictures I hadn’t seen before.

“Dad,” I told him with wonder looking at a particularly good shot, “You should have gone to Hollywood.  You’d have been a star.”

“Nah,” Dad said.  “Mom would never have gone with me.  And once the war was over, well, I wasn’t going anywhere else without her.” 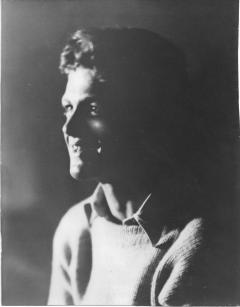 Dad never quite got over feeling lucky that he had Mom.  And he never stopped loving her.

But back to Mom’s story.

“It was Christmas morning, 1943, and I went over to visit Dad’s mom and dad.  Grammy E’d had symptoms of Parkinson’s Disease for seven or eight years at that point.  She could still move around (she was later, when I knew her, almost completely paralyzed), but she could barely talk.”

“You see,” Mom would say, “Your father had somehow managed to get Christmas leave – he was coming home!  He wanted to surprise me and wouldn’t let anyone tell me he was coming.  He was expected any minute, and there I was, trying to leave.  But I couldn’t stay.  That song made me cry; Freddie was so far away, and in so much danger.  I couldn’t bear hearing it.”

So Mom left after a while, she had other people and her own family to see.  Later Dad caught up with her and they spent most of Christmas together.  Both of them always smiled at the memory.  Dad was home for Christmas that year, just like in the song.  It was a magical year for them both.

Mom was always touched by Dad’s surprise and by his mother’s loving gesture in fighting back the paralysis that was taking over her body to try to get her son’s girl to stay.  To sing when she could barely speak.

We lost Mom on Easter of 1997, and Dad really never got over her passing.

The song and Mom’s story took on an even more poignant meaning in 2000.  Because on Christmas of that year, Dad joined Mom again for the holiday.  He went “home” to Mom for Christmas again, joining her in the afterlife.

Even through the sadness of losing Dad on Christmas, I always have to smile when I hear that song.  Because I can just see the warmth in Mom’s eyes now as she welcomed Dad home.  This time, I’m sure she was waiting for him, with open arms.

68 responses to “Home for Christmas (Reprise)”