Four years ago on a gray August day in Cleveland, nobody knew what to do with my sister Beth.  Except me.  I knew exactly what to do with her.  Nobody listened.  But I’m tellin’ you, I was right.

My sister Beth was a born wanderer.  Wherever she was, well, she wanted to be somewhere else.  For nearly 20 years following her divorce, Beth worked as a traveling nurse.  She criss-crossed the country, falling in love with California wine country, Albuquerque, Florida and points in between.  Just when she seemed to be settling in one place, she’d get that urge to go again.  And go she did.  She wanted to see all of America.  She said she never wanted to stop traveling.

So when Beth died due to complications of a stroke and kidney failure on August 11, 2009, I knew just what to do.

“She wanted to be cremated,” I informed my nephews, Dave and Chris.

“Why didn’t she tell us that?” Dave asked.  “Are you sure?  Nobody else has been cremated in our family.”

They both laughed, realizing just how well I knew my sister.   Creepy crawly things?  Beth wouldn’t be caught dead with a worm anywhere near her, dead or alive.  Cremation it was.

“But what do we do with the ashes?” Chris wondered aloud.

That was a dilemma, because Beth hadn’t filled me in on the second half of the plan.

“Well, she really hated it when she could no longer travel,” I said.  “Let’s pour her into a cardboard box, poke a small hole in it, and tie it to a freight railroad car.  Let the train scatter her ashes across America.”

Sadly, and to my regret, Dave and Chris didn’t take me seriously.  They flatly refused to break all kinds of laws and get arrested for terrorism or littering by letting their mom wander like Marley’s ghost, only without the chains.

So poor Beth is still in Cleveland – the one city in America she lived in that she hated.

When I read this story about a woman who placed her husband’s ashes into a bottle and threw it into the ocean in Florida, where he got to visit parts of the state that I’m sure he never would have visited otherwise, well, I was delighted.  Finally, I’d found a different sort of after-death experience for Beth.  Naturally, I sent the story to my nephew Dave.

“But Lease,” he responded.  “She has a new great-granddaughter.  She’d never want to leave Cleveland now!” 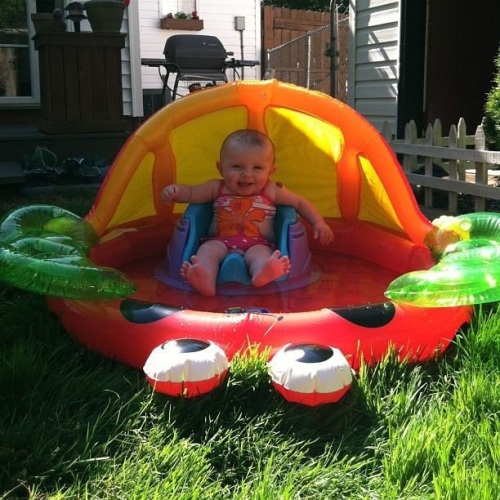 Thanks to Diatribes and Ovations for their post which inspired me to share this story with my Word Press Family.